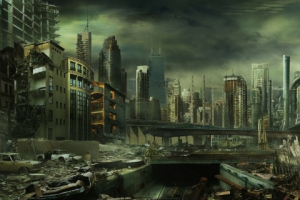 No hope. No release. No end.

A Crapsack World is a horrible setting where the pessimistic notion of "anything that can go wrong will go horribly wrong" almost always applies, and it corrupts its inhabitants into perpetuating that nastiness against each other. More succinctly, trying to survive in one of these places is gonna suck.

Although there are countless ways Crapsack Worlds can be depicted (often with Scenery Gorn), it is usually dark and on the cynical end of the Sliding Scale of Idealism vs. Cynicism, so it will have either Grey and Gray Morality or Black and Grey Morality, if not outright Evil Versus Evil in the worst of cases (beware of Darkness-Induced Audience Apathy if you decide to go this route though). Settings like these are not kind at all to idealists, who usually get traumatized and/or die horribly when their attempts to change the world through idealistic means meet up with cold hard reality.

Heroes in this setting are usually Anti Heroes on any level of the Sliding Scale of Anti-Heroes, and often have at least a bit of the Deadpan Snarker about them. Being good will suck, and if there are genuinely good heroes in this setting, expect them to be Knights In Sour Armor and/or Hurting Heroes—more idealistic heroes such as the Knight in Shining Armor tend to not last long in this kind of setting.

Villains tend to run the gamut from sympathetic Anti Villains (on any level of the Sliding Scale of Anti-Villains) right down to the most horrific Complete Monsters to grace any kind of media. Complete Monsters are especially common in these kinds of settings, both to represent the misery of the setting in general and to give the Anti-Hero someone to whom he can look good in comparison. In truly extreme cases, even the most popular or powerful of these monsters suffer just as badly as everyone else. And Anyone Can Die.

From here, these worlds can be depicted by authors in various ways, whether it would be dramatic or comedic, immutable or mutable.

If a Sugar Bowl (usually the antithesis of this trope) turns out to be one of these under the surface, then you have yourself a Crap Saccharine World. A Villain World is likely to be this, and Bad Future is a Sub-Trope. Someone who just thinks the world they inhabit is this is a Cynic or a Nietzsche Wannabe (or a Grumpy Bear if he lives in a pretty nice world).

For worlds that are almost literal sacks of crap see The Dung Ages. See You Would Not Want to Live In Dex for other crapsack environments. On a less negative note, the World of Badass will also be likely to have elements of the Crapsack World, to give justification on why kicking ass is very important to survive.

This trope is also known as World Half Empty, for the expression of pessimism being a state of seeing a glass with half the amount of water in it as being "Half empty". By definition, contrast A World Half Full.

No real life examples, please; This is a metaphysical trope that's clearly defined by the writer, not an opinion by people complaining about the world as a whole. Localized places that are very horrible in Real Life should perhaps go to Wretched Hive and other non-metaphysical tropes instead.

Examples of Crapsack World are listed on these subpages:
Retrieved from "https://allthetropes.org/w/index.php?title=Crapsack_World&oldid=1491269"
Categories:
Cookies help us deliver our services. By using our services, you agree to our use of cookies.