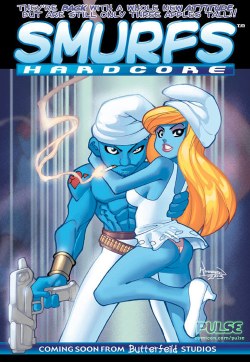 A Tone Shift that seeks to make a work of fiction "more adult". Usually, this is practically interpreted as "add more Sex Is Cool, profanity, heavy violence, and controversial content".

This trope usually means that a show will attempt to shift towards seriousness, cynicism and grit. In theory, archetypes which we are usually accustomed to acting in a more noble setting will have to act in one where they must think and act grimly in order to make progress, thus forcing re-examination of the tropes involved and making a different sort of character. In practice, though, writers often are too lazy to make use of what most of those words mean, and ending up randomly "spicing up" a work with gratuitous gore, cursing, and sex. See Not a Deconstruction.

When a show uses this trope as a tagline, expect anything that can go wrong will go wrong, the setting to be a World Half Empty, everyone to be bastards, lots of unpleasant things happen to the characters or backstories giving the characters a particular issue they can spend time angsting about.

As we can expect, this is fairly easy to screw up and poor use of these tropes can just result in Darkness-Induced Audience Apathy and Narm instead.

This trope became popular in Comic Books as a rebellion against the Silver Age led to more than a decade of clumsy attempts to show that comics are Darker And Edgier, and thus "not kid stuff anymore." See Bronze Age, Dark Age, and Nineties Anti-Hero for more details about how this worked.

Also mocked as "Grimdark" (one word), derived from the tagline of Warhammer 40,000. ("In the grim darkness of the far future, there is only war.") Sometimes justified with the phrase "Silly Rabbit, Idealism Is for Kids". Usually shows up in Darkfic.

Darker And Edgier is rapidly joining Hilarity Ensues as one of the most beaten-to-death marketing slogans. If a pre-existing show undergoes a Retool under the guise of making things Darker And Edgier, expect Jumping the Shark, especially if there was Executive Meddling involved. This tends to go better if the change was planned in storyboarding stages to keep the tone from shifting too abruptly.

Note that this is not the same as a Deconstruction. A Deconstruction plays out the genre's conventions to their logical conclusions in order to criticize the initial genre conventions. This does not have to be dark (see for instance Deconstructive Parody) and it doesn't prevent things from turning out well. Darker And Edgier just adds "dark" elements to try and get the same effect. Sometimes works, sometimes doesn't. Often times, though, a Deconstruction CAN cause a work to seem to be getting darker, simply because it's calling attention to dark aspects already implied but previously glossed over; see also Ascended Fridge Horror.

Parallel to Lighter and Softer, Bloodier and Gorier, Hotter and Sexier, Younger and Hipper, and Denser and Wackier.

Note that Tropes Are Not Bad, even one misused as often as this one. Please refrain from Complaining About Tone Shifts You Don't Like.

No real life examples, please; The world getting Darker and Edgier is called puberty, and it happens to everyone. Unless the divine has decided to change the world to make it more interesting, this trope can't really apply to the real world as a whole.

Examples of Darker and Edgier are listed on these subpages:
Retrieved from "https://allthetropes.org/w/index.php?title=Darker_and_Edgier&oldid=1952894"
Categories:
Cookies help us deliver our services. By using our services, you agree to our use of cookies.