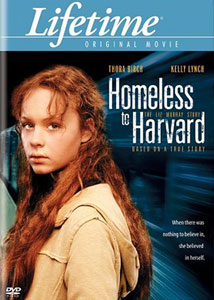 Yes, it's a Lifetime Movie of the Week. Yes, it's Based on a True Story. No, it's not a Cliché Storm.

From the Amazon page:

Liz Murray was raised in poverty by drug-addicted parents. Though they loved her, they were unable to care for her and Liz ended up living on the streets by the age of 15. Profoundly affected by her mother's AIDS-related death, Liz forced herself to look at her future and make some significant changes. Her prospects were dismal, yet she turned her life around by going back to high school. After earning her diploma in just two years, while still homeless, Liz won a New York Times scholarship for needy students, which enabled her to attend Harvard University.

Her story was made into a Lifetime Movie of the Week in 2003. It got nominated for three Emmys, including Outstanding Made for Television Movie.

Retrieved from "https://allthetropes.org/w/index.php?title=From_Homeless_to_Harvard&oldid=1927928"
Categories:
Cookies help us deliver our services. By using our services, you agree to our use of cookies.