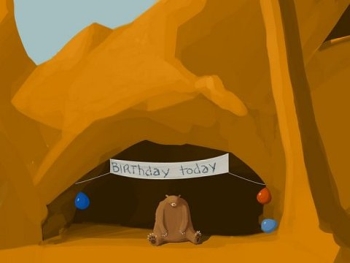 A woobie (named for a child's security blanket) is that character you want to give a big hug, wrap in a blanket and feed soup to when he or she suffers so very beautifully. Woobification of a character is a curious, audience-driven phenomenon, divorced almost entirely from the character's canonical morality.

The Woobie's appeal lies in how it allows the audience to experience catharsis. The Greek philosopher Aristotle proposed that tragedy is popular because it allows people to experience and let out their negative emotions, "cleansing" themselves. The Woobie is popular for this same reason. A story with The Woobie allows the audience to vicariously experience relief from some pain by fantasizing about relieving The Woobie's pain. (No, not that way! Well, okay, sometimes.) Woobification can also tie into a disturbing hurt/comfort dynamic, in which fans enjoy seeing the Woobie tortured, if only for the chance to wish the hurt away. This is often made manifest in the curious form of the Hurt/Comfort Fic.

An important aspect of The Woobie is that their suffering must have its genesis in external sources: a character, however sympathetically portrayed, who suffers as the result of their own actions is a Tragic Hero and does not qualify.

A properly executed Woobie inspires deep fannish devotion. A poorly executed Woobie earns scoffing and mockery, perhaps at the same time. The difference between the Woobie and such Sickeningly Sweet characters as the Littlest Cancer Patient is that the audience actually finds the Woobie compelling rather than pathetic. Where you draw the line is sometimes a matter of opinion.

Sometimes a Woobie goes Omnicidal Maniac and seeks to destroy the world in a bid to make the pain stop, in which case you're dealing with a Woobie, Destroyer of Worlds. Sometimes it's possible to bring such a woobie back from the edge, but other times, only his or her destruction in a Shoot the Dog moment will stop things, and is usually a Tear Jerker when done well.

In Lighter and Fluffier fiction, The Woobie can sometimes earn his/her happy ending.

In many versions there is also something about the Woobie's suffering that is notably heroic or noble. In this case the character is an Iron Woobie. Sometimes, The Woobie is not so outwardly emotional about their hurts (Or anything else, for that matter), making them a Stoic Woobie.

See Damsel in Distress and Troubled but Cute. In Anime, The Woobie makes up a large part of Moe characters. Part of their appeal can come from them constantly striving against their chains. Can be taken to the point of Break the Cutie, and if the amount of misfortune seems too great it may result in Deus Angst Machina. And the entire setting can even be like this. Yes, the world can be that cruel.

Contrast the Chew Toy. If in your opinion the character desperately needs to die, that's likely Damsel Scrappy. Should not ever be confused with Butt Monkey. A Butt Monkey is essentially The Pollyanna that is constantly abused. A woobie is a character who gets tortured badly and sometimes even cries and complains about their situation. However, there is a lot of overlap; a Butt Monkey can often become a Woobie if abused too often and too mercilessly.

Not to be confused with a species of hairy bipedal humanoids that inhabit the planet Kashyyyk. (though the most famous one is a woobie, see the "Star Wars" subsection), or a Linux installer.

Examples of The Woobie are listed on these subpages:

Retrieved from "https://allthetropes.org/w/index.php?title=The_Woobie&oldid=1809903"
Categories:
Cookies help us deliver our services. By using our services, you agree to our use of cookies.