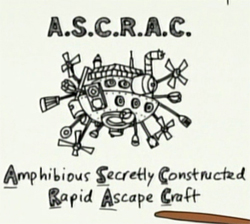 "I ain't climbin' inside no ASCRAC!"

In fictional acronyms, priorities are reversed. It's not so important that the full name be clear, memorable and to the point; it matters much more that the actual acronym spell out a word or phrase, preferably a meaningful, impressive (or just plain funny) one. This results in "backronyms", acronyms created before the names they allegedly stand for—if the acronym even stands for anything at all.

For instance, no writer would have allowed New York's police force to come up with the abbreviation "NYPD". That can't even be properly pronounced. No, they'd have named it, ehm... something like the Central Organization of Police Specialists. It doesn't matter so much that the full title is essentially meaningless—we got it to spell out COPS! Heck, we can even sell some toys now! Or, you know what would be better than COPS, would be JUSTICE! So what does JUSTICE stand for? Nothing. That's right, we don't even need it to stand for anything if we don't want it to!

This isn't just for names that are cool, of course. It's also for names which accidentally hint at the true nature of an organization (e.g., a pro-tobacco council with the name CHOKE), or just as "accidentally" spell out something naughty or undignified.

For even more fun, make it a Recursive Acronym, or add Acronym Confusion. In government, military, and engineering contexts, this is absolutely Truth in Television, probably because there are so many acronyms in those fields that nobody can remember them if they don't have a nice mnemonic. Might often overlap with Embarrassing Nickname if it inadvertently spells out something silly or contradictory.

There are also backronyms, where an already-extant name is turned into an acronym by reverse formation. For instance, DVD might have originally been a digital video disc, or maybe the DVD Consortium insists the initials don't stand for anything. The discs then prove to be useful for some other purpose, like storing computer data, and the name is backronymed to be a digital versatile disc – choosing new words to yield the desired initials. SMS was a "short message service" in English, but en français that might be « service des messages succincts » to keep the same initials.

Technically it's only an acronym if you pronounce it as one word (like "laser" or "scuba"), and if you spell out the letters, it's an initialism. In practice, most people just use "acronym" for them all, so feel free to add them as examples.

Examples of Fun with Acronyms are listed on these subpages:

Retrieved from "https://allthetropes.org/w/index.php?title=Fun_with_Acronyms&oldid=1927643"
Categories:
Cookies help us deliver our services. By using our services, you agree to our use of cookies.