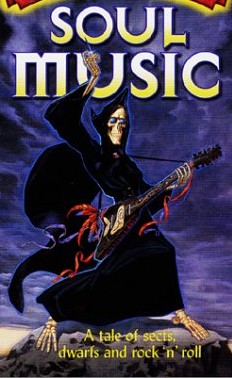 This trope is brought to you by Death playing an electric guitar.

Stated another way, all but the most pedantic of viewers will forgive liberties with reality as long as the result is wicked sweet or awesome. This applies to the audience in general; there will naturally be a different threshold for each individual.

The Rule of Cool is another principle that seeks to dispel arguments among fans over implausibility in fiction. It has been cited by animation director Steve Loter (of Kim Possible, Clerks the Animated Series, Tarzan, and American Dragon: Jake Long) in response to questions from fans attempting to justify temporary breaches in logical consistency. It is a complement to Bellisario's Maxim and the MST3K Mantra.

Of scientific laws that this trope circumvents, the third law of motion is probably the most frequently revoked, with the Square-Cube Law probably a close second.

Note that you only get to invoke the Rule of Cool if the end product is, in fact, cool. (If the coolness itself causes the result, then it's Pure Awesomeness.) Note also that different opinions on what is "cool" create the most arguments over this. That being said, the Rule of Cool is very subjective. Failure to properly use this trope can cause collision damage with walls.

You will need to refer to The Utterly and Completely Definitive Guide to Cool.

A Sub-Trope of Artistic License.

Tropes that exist just because of this rule:

Series that exist because of this rule:

Retrieved from "https://allthetropes.org/w/index.php?title=Rule_of_Cool&oldid=1954244"
Categories:
Cookies help us deliver our services. By using our services, you agree to our use of cookies.