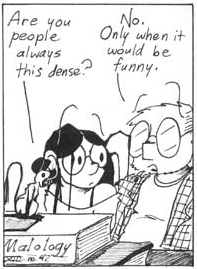 Any violation of continuity, logic or physics is permissible if the result gets enough of a laugh.

This is the comedy equivalent of the Rule of Cool, and is accordingly weighted more in comedy shows. Especially easy to invoke in humor-based American animation and Web Comics, where people expect the lack of realism in the art to translate to other areas.

Tropes existing purely due to the Rule of Funny:

Examples of Rule of Funny include:

Retrieved from "https://allthetropes.org/w/index.php?title=Rule_of_Funny&oldid=1835669"
Categories:
Cookies help us deliver our services. By using our services, you agree to our use of cookies.