Everything About Fiction You Never Wanted to Know.
< Mahou Sensei Negima
Jump to navigation Jump to search 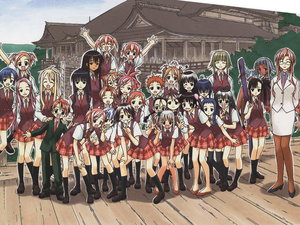 Mahou Sensei Negima has been trying to push Loads and Loads of Characters to its limits for a while. These are the pages where its legions of schoolgirls, supernatural beings and lecherous talking animals are described, so gather ingredients to make a sandwich or something, we're gonna be here for a while.

It should be noted that all names are stated in the order that the manga shows them, not necessarily all Western order. That means Ku Fei instead of Fei Ku and Kagurazaka Asuna instead of Asuna Kagurazaka, but Negi's name is still listed as Negi Springfield. This was done because Ku Fei and Chao Lingshen sound better that way, as opposed to western order.[2]

Additional Pactio and Personal Information can be found on the New Info Page.

Click here for the relationship chart as it stood nine chapters before the end of the series. It's as complicated and spoilerific as you'd expect.