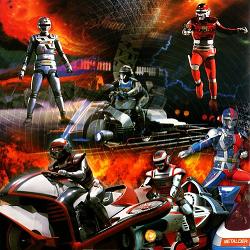 Metal Heroes is a franchise of Japanese live-action Action/Adventure programs produced by Toei.

The series aired from 1982 (with Space Sheriff Gavan) to 1998 (with Tetsuwan Tantei Robotack). They are tokusatsu-based shows, in the same vein as Kamen Rider and Super Sentai.

In the US, footage from these series was adapted by Saban during the late-1990's in the same way they did with Super Sentai for Power Rangers, producing two shows, VR Troopers (1994-1995) and Big Bad Beetleborgs (1996-1997). The programs are popular in Japan, France, Brazil and Southeast Asia. It also gave us the wonderful acid trip Uchuu Keiji Shaider. Compared to even Kamen Rider, it was perhaps the darkest franchise of all tokusatsu shows in general and more adults liked it than the kids.

The NES game Shatterhand was produced by Japanese company Natsume and released for the both the NES and Famicom. Unlike in most instances, the American version Shatterhand was actually the original version of the game (although it was released later). Angel (a subsidiary of Bandai) agreed to publish the game in Japan for Natsume under the condition that they could modify it into a licensed game promoting one of their properties. Thus the game was re-worked to function as a Tokkyuu Shirei Solbrain video game.

The following shows were produced in the Metal Heroes franchise:

It should be noted that there are three distinct trilogies within the franchise:

The following tropes are common to many or all entries in the Metal Heroes franchise.
For tropes specific to individual installments, visit their respective work pages.

Retrieved from "https://allthetropes.org/w/index.php?title=Metal_Heroes&oldid=1758690"
Categories:
Cookies help us deliver our services. By using our services, you agree to our use of cookies.