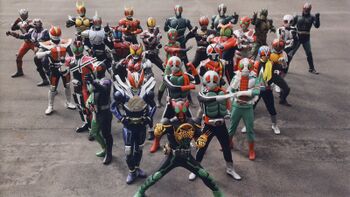 Kamen Riders 1 through OOO (and New Den-O). Almost too many to be listed in one caption.[1]

Kamen Rider (formerly romanized as Masked Rider prior to Kamen Rider Double, wherein Double and all successive riders are now officially romanized by their actual Japanese monikers) is a franchise of tokusatsu series created by Shotaro Ishinomori and produced by the Toei Company. A brother show to Super Sentai. Typically has a smaller main cast than Sentai (the title of each series refers to a single main Rider instead of Super Sentai's Five-Man Band), but not always. Some series feature huge numbers of Riders, with the most extreme example being Kamen Rider Ryuki and its 13 Riders (although Kamen Rider Hibiki has a lot more if you count all the Riders seen briefly, or even just briefly mentioned).

Often involves insect-themed armour (concept partially ditched for the Heisei Riders, in which only a minority is directly insect themed and mainly maintain just the general helmet design reminiscent of insect eyes). And motorcycles. Rather short on Combining Mecha (although Kamen Rider Faiz and Kamen Rider Fourze feature some nice Mini-Mecha, and Kamen Rider Den-O had artillery-loaded, flying train cars).

More recently, the first 10 or so riders have been revived in a manga series: Kamen Rider Spirits. As Badass as they originally were, they become even more so.

The Kamen Rider franchise is generally divided into two distinct "eras", using the Japanese names for the time period in which they were made. The Showa Era[2] consists of:

In the 1990s, while the series was on hiatus, a trio of movies was made; though produced after the end of the Showa period (1989), English-speaking fans typically place them with the Showa series because of Ishinomori's involvement:

Every series created after Ishinomori's death is referred to as the Heisei Era[3]:

The first two series were retooled for a Darker and Edgier movie reboot franchise, consisting of two films: Kamen Rider the First (2005) and Kamen Rider the Next (2007). The first movie was an action-romance and was received relatively well. The second movie, which traded the romance for horror, was not so well received.

2009 also had Kamen Rider G, a TV special that was an Affectionate Parody of all things Kamen Rider, starring veterans from the show and members of the idol group SMAP. G also served as a teaser for Decade, with Tsukasa and the other nine Heisei Riders showing up to give G a pep talk during the final battle.

Namco Bandai has a video game series called Kamen Rider Climax Heroes, which is basically a fighting game featuring all of the Heisei-era protagonists. It started with a PlayStation 2 game to tie into the Decade movie and has followed with Updated Rereleases on the Wii each following year; these updates mainly consist of adding that year's new Rider and some others to the roster. In the West, the Climax Heroes engine was Remade for the Export as a Dragon Knight game.

An arcade game also exists, Kamen Rider Battle: Ganbaride, that works by collecting cards and scanning them into the machine. It was being ported to the Nintendo DS under the name of Kamen Rider Ganbaride: Card Battle Taisen, covering the first ten or so expansion sets.

One series (Black RX) was brought over to the US, Power Rangers-style, as Masked Rider (1995-1996). Although it got fair ratings and good toy sales it ended with many plot points not tied up due to there being no more Rider series to adapt. Another series (Ryuki) has been similarly adapted as Kamen Rider Dragon Knight (2009). While the new adaptation was much closer to the spirit of the original, and quite well-liked by the adult Periphery Demographic, it didn't fare well in the ratings overall but is much more liked than Masked Rider in the Kamen Rider fanbase. Recently Toei has anounced there will be a third attempt to bring Kamen Rider in America. Around the same time, Saban trademarked "Power Rider", which fans speculate to be this third attempt.

May 2012 sawy the release of Kamen Rider X Super Sentai Super Hero Taisen, a full-fledged crossover between the two franchises with 240 heroes joining forces. The star on the Kamen Rider side will be Tsukasa Kadoya/Decade, with Gentaro Kisaragi/Fourze, Eiji Hino/OOO, the Den-Liner crew, and Daiki Kaitou/Diend playing prominent roles.

Tropes used in Kamen Rider include:
Retrieved from "https://allthetropes.org/w/index.php?title=Kamen_Rider&oldid=1898711"
Categories:
Cookies help us deliver our services. By using our services, you agree to our use of cookies.