Everything About Fiction You Never Wanted to Know.
< No Transhumanism Allowed
Jump to navigation Jump to search 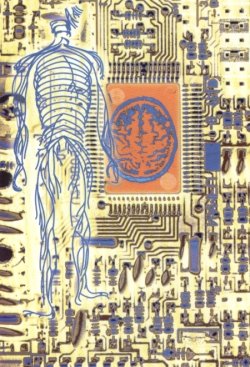 Though transhumanism is currently largely theoretical, the philosophy has numerous supporters... and numerous detractors, who regard it as somewhere between misguided and an abomination.

The current scientific consensus seems to be that aside from some minor improvements like bio-engineered resistance to certain diseases, it's unlikely to ever happen. The human body is so complex that it is unlikely that scientists will ever be able to fully understand, let alone improve upon it within the lifetime of a technological civilization. Of course, if you would have told a man little more than a century earlier that one day we'll be building heavier then air machines that outperform birds in just a few short years, he'd have probably laughed in your face as well. Never underestimate science's capability to march ever forward.

It is actually the rapid pace of technological advancement that makes some forms of transhumanism unlikely. Consider one of the genre-favorites—a cybernetic brain implant. Now imagine a new model with twice the capacity coming out every 12–16 months. Now imagine if every three to five years an entirely new hardware standard appears that is not backwards compatible. Added to which we have the inevitable bugs, security glitches and hardware failures—think Windows Vista, XBox 360's RROD, etc. How many times would it be practical, ethical, or even sane for the average person to undergo brain surgery to replace or upgrade their implants? Far more convenient to put that chip in something like a wristwatch, or a cellphone; some device which can be easily and conveniently upgraded and replaced. An external device which won't fry your brain in the event of an unexpected glitch.

One way to deal with this problem would be to use external augmentations connected to the brain through some sort of universal physical interface rather than directly implanting the entire thing. No matter how fast computer technology advances, barring radical advances in bioengineering, the Human brain will always have an upper limit on the amount of input/output it can handle at one time. Once you have a brain/computer interface that can handle that level of I/O with perfect fidelity just implant one with options for external hardware connections and you shouldn't need any more surgery. Show of hands—who wants an Unusual User Interface?

Such problems have not prevented the developed world from trusting developing and buggy new technology in the past. Consider Information technology: problematic and often unreliable, it now controls everything from critical infrastructure to nuclear weapons. From this point of view, there is still reason to believe the human body may be next. There are setbacks, as there always will be for new technology, but in the end, the reward typically outweighs the risk.

This isn't exactly an open invitation to jump in head first, but delaying too much can put you years behind the competition, ethical considerations aside. If it does work, groups that green light transhumanism will leave the others in their dust. Transhumanism is potentially a significant game-changer. More capable people can make better technology, faster and more efficiently, allowing people to become more capable.

In a world with transhumans, communities that do not adopt can be left without much of a fighting chance, either on the battlefield, or in the marketplace. The new technology may be unpredictable, but if it vastly outperforms the old, the alternative to embracing it may be having it sweep you aside. Take early guns for example, near as dangerous to the shooter as they are to the target, but a combination of sheer battlefield effectiveness and eventual improvements made everything else obsolete. An army cannot choose to only use swords and arrows today.

Some people regard this scenario with misgivings. They see the potential gap between enhanced and unenhanced people as turning into a combination of classism and racism. We have a history of this happening when a group gains an advantage.

What transhumanism supporters tend to predict will happen (or has already started to happen) is that the various sciences required will start their way for both preventative, and repair of otherwise permanent damage (such as pacemakers or cybernetic replacements). These will encounter relatively little opposition due to their medical nature, and will in turn force their foot in the door, paving the way for ever greater advances, both from a technological and public relations standpoint.