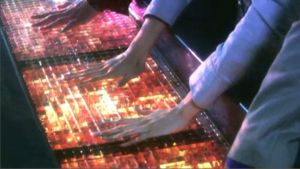 Who knew water could be so effective in piloting a ship?

"[The ship] won't move unless you're naked? That's very kinky, wouldn't you say?"

One of the joys of reading or watching Speculative Fiction shows is the wonderfully bizarre touches an author can add, like the Unusual User Interface.

Want to make your cyborg or Ridiculously Human Robot seem truly technological? Have them plug a phone jack into their skull to browse the web. Maybe you'd like to wow the audience with a truly spectacular piloting system for a space ship? Have a Holographic Terminal serve as the flight controls. Or heck, maybe you just want to have the universe destroying superweapon be triggered by interpretive dance. Point is, there's more ways than a keyboard, knobs, or a steering wheel to tell a machine what to do in scifi, and here are some of those ways.

The likely users are cyborgs, robots, telepaths, Energy Beings, mages, and the genetically engineered. A normal human is unlikely to be able to use one of these unless it's non invasive.

Examples of Unusual User Interface include:

Angry Video Game Nerd (quoting The Wizard (film)): "I love the Powerglove. It's so bad."