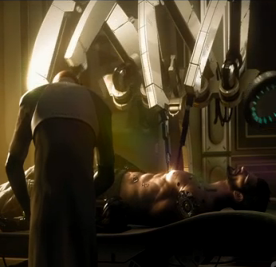 A villain is defeated and suffers a horrific Disney Death. Their body is shattered beyond repair. No One Could Survive That!

But later, he returns! Only this time, he's a cyborg! He's got more power, and he's less human so it's OK to be more brutal on him.

Heroes are occasionally subject to this trope. Unlike villains, this tends to make them question their humanity, and in doing so retain it.

This trope can serve as the Origin Story for both heroes and villains of the cybernetic variety.

Compare with Robot Me and Virtual Ghost. If the cybernetics are obvious and enhance the evilness of a character's appearance, it's a case of Red Right Hand. When the one doing the rebuilding is sadistic enough, it may involve Vader Breath. If the injuries are too extensive or the technology not far enough advanced, may result in Man in the Machine. A nasty variant is when a bad guy takes a Not Quite Dead hero and has him Reforged Into a Minion.

Examples of We Can Rebuild Him include:

We're getting there. It's inevitable.

Retrieved from "https://allthetropes.org/w/index.php?title=We_Can_Rebuild_Him&oldid=1968533"
Categories:
Cookies help us deliver our services. By using our services, you agree to our use of cookies.