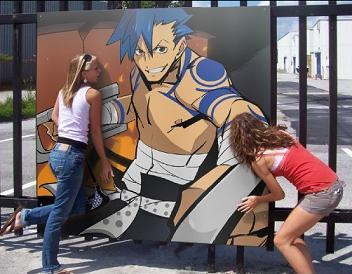 Perverse Sexual Lust is a term for a real person's attraction to a fictional character.

It originated in a reader poll during the early days of the Web Comic It's Walky!. The author wished to know the reason behind the slightly loopy church-girl character Joyce Brown's popularity, and saw this option achieve an overwhelming win.

It's somewhat justifiable in live action, especially if the character is played by a hot person, although it does raise the question of what is actually being fancied. Is a viewer fancying CSI New York's Lindsay Monroe because of Anna Belknap, the character herself, or a combination of the two?.

It gets into the seriously weird when you're dealing with animated characters, although putting purely fictional characters into ahem situations has less creepy spillover to any real life people. Let's face it, a lot of Shipping would actually be wrong if we applied the same standards to Real Life. And, of course, many animated characters are intended to be attractive to the viewer, in which case it could be argued that this is the response the character designers intended in the first place.

Compare Fetish Fuel, Memetic Sex God. When a fictional character lusts after a Real Life person, then it may be Celeb Crush.

No examples, please; We don't care about real people's attraction to fictional characters, because it doesn't matter from a storytelling point of view.

Retrieved from "https://allthetropes.org/w/index.php?title=Perverse_Sexual_Lust&oldid=1716068"
Categories:
Cookies help us deliver our services. By using our services, you agree to our use of cookies.