Everything About Fiction You Never Wanted to Know.
Jump to navigation Jump to search
/wiki/Roxy Musiccreator 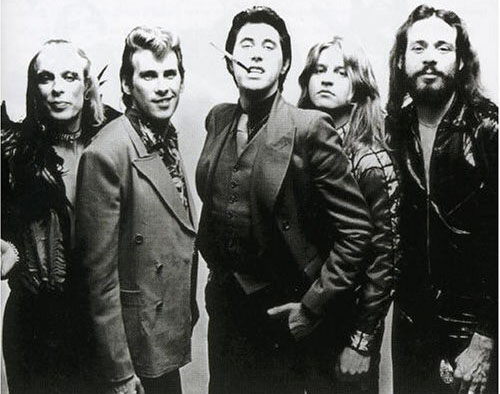 Roxy Music's early lineup. Eno is the one on the extreme left, Ferry is in the middle.

Roxy Music was a British art rock/glam rock band in The Seventies and The Eighties, known mainly for being a significant influence on Punk Rock and New Wave and being the band where musician and knob-twiddler extraordinaire Brian Eno started his professional career. It had the following members:

Roxy Music's early material was definitely art rock, defined by the ironic juxtaposition of nostalgia for the past (manifested in Ferry's lyrical and vocal Campiness) and futuristic, avant-garde experimentalism (Eno's "treatments", Manzanera and MacKay's predisposition towards atonality) within the context of rock music. This early lineup produced two critically acclaimed albums, Roxy Music and For Your Pleasure. These albums also introduced two other constant elements throughout the band's career: pop art-influenced "high fashion" album covers depicting scantily-clad models, and a well-defined visual presentation (see above).

However, the creative tension soon degenerated into outright conflict, and Eno left the band in 1973, taking all the jarring weirdness, experimentalism, make-up and freaky glam outfits with him. He was replaced by 19-year old keyboardist/violinist Eddie Jobson. Roxy Music afterwards slowly but surely evolved into a more straightforward pop/glam rock band but with still some unpredictability, largely defined by Ferry's obsession with glamour and suave, Chivalrous Pervert persona. The band handled this transition very well at first, increasing their popularity and gaining several hit singles while obtaining further good reviews for Stranded, Country Life and Siren. The band went on an extended hiatus in 1976 after touring for Siren, with Ferry taking the opportunity to concentrate on his solo albums, while Manzanera rejoined Eno for the 801 Live album.

When Roxy reunited in 1978, Jobson wasn't brought on board and Ferry took up keyboard duties again. The band changed its sound again, stripping any last remnants of their experimental art rock past in favour of super-smooth disco-influenced pop. The resulting albums, Manifesto and Flesh + Blood, garnered the band negative reviews for the first time in their career and didn't do much on the charts apart from a few hit singles. Thompson himself left the band after Flesh, initially temporarily after a motorcycle accident then permanently.

Marred by the departures and the critical drubbing they received, Roxy Music regrouped with the aid of additional session players and recorded what would be their last album, Avalon. More carefully recorded than the hit-or-miss Manifesto and Flesh and containing lushly-produced lounge-synth-pop soundscapes far removed from their art-rock roots (in fact, probably closer to Sade's smooth pop than Eno's weirdness), Avalon restored the band's good standing with critics and did way better on the charts, spawning a hit single. Having recovered their success, Roxy Music dissolved on a high note.

Ferry returned to his solo career, picking up where he left off with Avalon and recording more smooth lounge-synth-pop, to great commercial success and reasonable critical acclaim. Manzanera and MacKay went on to solo careers and formed a short-lived band called The Explorer. Thompson worked as a session drummer.

Roxy Music reformed in 2001, sans Eno, and have been touring regularly since. They also recorded material for a new album with Eno, but these sessions were reworked into Ferry's 2010 solo album, Olympia.

Discography:
Roxy Music provides examples of the following tropes:
Retrieved from "https://allthetropes.org/w/index.php?title=Roxy_Music&oldid=1522598"
Categories:
Cookies help us deliver our services. By using our services, you agree to our use of cookies.