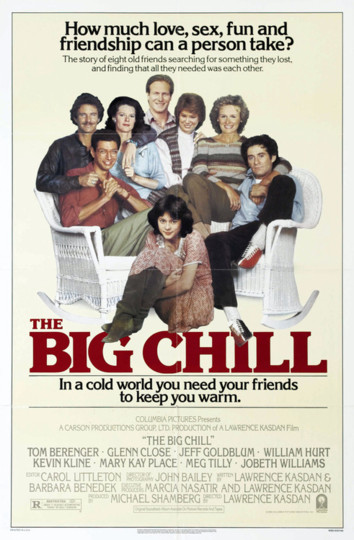 The Big Chill is a 1983 Dramedy film directed by Lawrence Kasdan and featuring a veritable Who's Who of '80s actors, including Tom Berenger, Glenn Close, Kevin Kline, Jeff Goldblum, William Hurt, Meg Tilly, and JoBeth Williams.

This is considered to be one of the finest films to show Sixties liberals who, in The Eighties, have basically become establishment types, suffering the angst of the 1980s, while lampshading the fact that "we had one of the cushiest berths ever".

A group of people who knew each other as college students and friends during the 1960s end up getting back together some 20 years later after their friend Alex commits suicide. All of them have gone along their ways and now look back and wonder where their idealism went. Along the way, they renew their friendships, and sometimes even more, as they try to understand why Alex, with all of his potential, worked at menial jobs and then, for apparently no reason, decided to kill himself.

Tropes used in The Big Chill include:
Retrieved from "https://allthetropes.org/w/index.php?title=The_Big_Chill&oldid=1543032"
Categories: