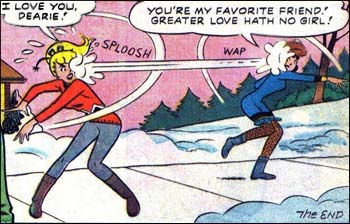 They're best friends. You can tell because they bicker Like an Old Married Couple.

Somehow, Steve the Deadpan Snarker has been befriended by kind hearted Pete, who has become a loyal friend, but The Power of Friendship failed to cure Steve of his Jerkass tendencies (though it does allow his heart of gold to shine through at times). So Steve continues to openly insult, belittle, and antagonize Pete, who faced with this sanity cracking assault... smiles and says "Oh, you're such a kidder, Steve!" which of course drives Steve up the wall while "cementing" the friendship in Pete's mind. Hilarity Ensues.

Woe betide any outsider to this unusual 'friendship' who thinks that because one is constantly snarking on the other, it gives the outsider the right to make snide comments about the other as well; usually, they will quickly (and painfully) learn that "no one makes fun of him/her but me." This is more a given with the second variant than the first, but with the first it may be a Pet the Dog moment or proof that aw, look: They really do like each other!

Contrast with Headbutting Heroes, who just cold-out despise each other despite being the best of heroes, and With Friends Like These..., who aren't actually friends. Compare Aw, Look -- They Really Do Love Each Other for a romantic equivalent.

Examples of Vitriolic Best Buds are listed on these subpages:
Retrieved from "https://allthetropes.org/w/index.php?title=Vitriolic_Best_Buds&oldid=1928852"
Categories:
Cookies help us deliver our services. By using our services, you agree to our use of cookies.