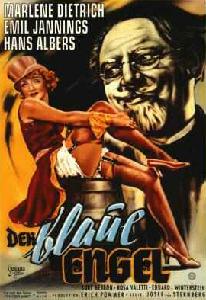 The plot follows Emmanuel Rath (Jannings) through a transformation from esteemed educator at the local Gymnasium to a destitute vagrant in Weimar Germany. Rath's descent begins when he punishes several of his students for circulating photographs of the beautiful Lola Lola (Dietrich), the headliner for the local cabaret, "The Blue Angel." Hoping to catch the boys at the club, Professor Rath goes to the club later that evening and meets Lola herself. He soon becomes enthralled with the girl and begins to woo her, slowly being overcome by lust and jealousy regarding the others who watch her act. Tragedy ensues.

Tropes used in The Blue Angel include:
Retrieved from "https://allthetropes.org/w/index.php?title=The_Blue_Angel&oldid=1911164"
Categories:
Cookies help us deliver our services. By using our services, you agree to our use of cookies.