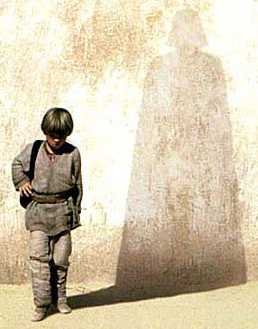 A clue or allusion embedded in the narrative that predicts some later event or revelation. It could be something a character says or does, an event that doesn't make sense until much later, a Meaningful Name, or really anything at all. The foreshadowing may be ominous, or seem perfectly innocent at the time.

Good foreshadowing doesn't spoil the surprise, yet seems an obvious clue in retrospect. Bad foreshadowing either deflates the suspense or is too obfuscated (such as an Ice Cream Koan) to predict anything. Foreshadowing may establish something to avoid an Ass Pull. Or it may put a viewer off as introducing a needless supernatural element to the story.

In literature, foreshadowing is commonly done when a possibility is mentioned, but almost immediately dismissed or disproved. To some readers, they will dismiss the suggested possibility just as the unsuspecting characters do. More experienced readers will immediately call the author's bluff and know what to expect.

Dreaming of Things to Come often foreshadows. Chekhov's Gun is often used as a foreshadowing tool. If it makes no sense, it may be Strange Minds Think Alike. If this is done with a work released after the work containing that which it foreshadows (such as the page image), it's a Call Forward.

A specific variant is Futureshadowing, where the shadowing comes after the actual event chronologically but is still seen before it.

When there's only a tiny gap between the foreshadowing and the actual foreshadowed event, that's Five Second Foreshadowing.

Not to be confused with The Shadow Knows, which the picture to the right uses to do this trope.

Naturally, the examples are full of spoilers. Consider yourself warned.

Examples of Foreshadowing are listed on these subpages:
Retrieved from "https://allthetropes.org/w/index.php?title=Foreshadowing&oldid=1938971"
Categories:
Cookies help us deliver our services. By using our services, you agree to our use of cookies.