Everything About Fiction You Never Wanted to Know.
Jump to navigation Jump to search
/wiki/Tom Pettycreator 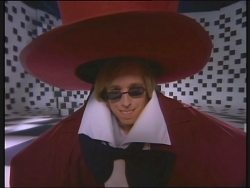 Thomas Earl "Tom" Petty (October 20, 1950 – October 2, 2017) was an American singer-songwriter and multi-instrumentalist. He was the frontman of Tom Petty and the Heartbreakers and a member of Mudcrutch. He was also a member of the Supergroup The Traveling Wilburys under the pseudonym of "Charlie T. Wilbury Jr." He recorded a number of hit singles, many of which remain heavily played on adult contemporary and classic rock radio. Likewise, his music, most notably his hits, became increasingly popular among younger fans as he continued to host sold-out shows through the end of his life.

Petty was also a vocal critic of the modern recording industry and the disappearance of independent radio stations.

Petty was supported by his band, The Heartbreakers, for the majority of his career. He occasionally released solo work, such as 2006's Highway Companion, on which he performed most of the backing instrumentation himself. However, members of The Heartbreakers have played on each of his solo albums and the band has always backed him when touring in support of those albums. He also toured with Mudcrutch in order to promote their debut album. Petty was managed by Tony Dimitriades since 1976. On February 3, 2008, Tom Petty and the Heartbreakers performed at the Super Bowl XLII Halftime show.

He had a minor but credited acting role as a mayor in Kevin Costner's post-apocalyptic (and box office) disaster film The Postman and was the voice of Lucky (Luanne Platter's redneck boyfriend-turned-husband) on the later seasons of the FOX sitcom King of the Hill.

Petty suffered a massive heart attack early in the morning of October 2, 2017, and died later that night at a hospital in Santa Monica, California.