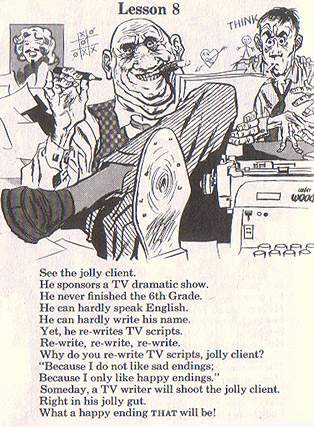 As one person rarely has the financial resources to create and more importantly distribute their own television shows, movies, comics, etc. entertainment is generally produced by corporations. They are the ones that put up the money to see your favorite book turned into The Film of the Book. While an actor gets paid for their services, they're ultimately free agents; eventually they will move on to another gig. At worst they lose their time and reputation, but only rarely are financially invested in their work's success. Directors exist in a similar situation. A television network or studio, though, is a single entity, and if what it produces doesn't make a profit the business folds.

No matter how brilliant that last episode was or how insightful the protagonist's dream was about the nature of man, if nobody watched it and the advertisers are complaining, survival means you have to put Old Yeller down. In the end nobody likes this, so it is in the executives' best interest to see that their money is well spent, budgets are kept, and the show gets finished by Sweeps. Often this means vetoing ideas, or dictating that certain elements be added in. So when the organization behind the creators takes a hand in creation you get this trope. The goal of an executive is to try to steer the show into the direction of profitability.

One way in which these traits manifest themselves is for the executive to force changes on a show which he feels is too different or edgy, in order to make it "less risky" or "more appealing to the audience"—in other words, garner higher ratings. "More appealing" often translates into "more action-oriented" or "sexier" or, in the immortal words of Woody Harrelson as Steve Martin's producer in L.A. Story, "more wacky, less egghead." Often the executive wants to reach the Lowest Common Denominator for better or worse. And far too often this can edge over into denigrating viewers' intellect or that their memory is comparable to a small fish species. And of course if you stick too closely to what "works" it can be hard to stand out. Which can be the surest death sentence of all.

Sometimes, though, the meddling is solely because the executive wants the show dead for one reason or another. Of course, it can backfire and the executive either eats crow, gets replaced, cancels the show anyway (ratings and revenue be damned), or gets an ego. And on the other hand, there are actually instances where the executives actually helped create the show in the first place. For example, it could have been through Executive Meddling that a work actually gets a localization in the first place, or saved from a troubled production.

The results can be positive, especially if the imposed limitations force writers to think more creatively. Not to mention, executives aren't always wrong; just like there are good and bad writers, there are executives that are good at their job and executives that are bad. But, well, since when does someone doing their job right get any attention? The prevalence of this trope leads people to think any retools or "Jump the Shark" ordeals are a result of outside influences. There is something of a bias, as the times where Executive Meddling improves things are rarely reported—no one complains when the system works. However, when something breaks, everyone knows about it because people try to redirect the blame. After all, what director would say "my original idea wasn't that good, but some guy behind a desk gave me one that worked better" rather than "The guy behind the desk is responsible for that pile of crap because he prevented me from doing my original idea"?

Another example of how Executive Meddling may manifest itself is in a game (be it a show, tabletop, video game, etc.) where an Obvious Rule Patch is released or the rules are updated during the season or mid-season. Some shows didn't cover every loophole and had players abuse it and find perverse incentives. Other times, Executive Meddling helped people actually use other classes and characters in a game, saving them from the scrappy heap.

Executive Meddling is often the source for Enforced Tropes.

Problems can be created just as easily from Creator Breakdown, Protection From Editors, Writer on Board or Author Filibuster—things that a reasonable and responsibly meddlesome executive can prevent from ever coming to pass. Quite often whoever you think is responsible is merely Misblamed.

If the show itself escaped executive meddling, but its time slot is changed around and has zero promotion, then it's Screwed by the Network.

See also Music Is Politics, Viewers are Morons, Creative Differences, Executive Veto, Obvious Beta, Media Watchdog, Moral Guardians, Alan Smithee, Get Back in the Closet and Publisher Chosen Title. Compare What Could Have Been, Wag the Director and Development Hell / Vaporware. Contrast with Getting Crap Past the Radar and Protection From Editors. Many a Troubled Production is caused by this.

Examples of Executive Meddling are listed on these subpages:

Retrieved from "https://allthetropes.org/w/index.php?title=Executive_Meddling&oldid=1837568"
Categories:
Cookies help us deliver our services. By using our services, you agree to our use of cookies.