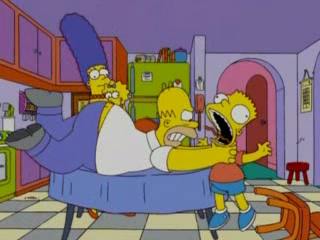 He does this all the time.

Parents are supposed to be the protectors of children, but these parents are either so damaged themselves that they can't do the job, greedy or villainous to the point that they never had any interest in doing the job properly, or would rather use the child as a means to an end.

This includes parents who are emotionally, physically, or mentally abusive, or who neglectfully allow their children to be abused by others if they don't abuse the child themselves; sexual abuse is typically treated as a special kind of evil and thus not entirely in the same category as the other types of abuse. Sometimes, the abuse at the hands of their parents or others end up as the Freudian Excuse for a villain (or even worse, generates a villain who has Mommy Issues), but sometimes, the character manages to not grow up broken, bitter, and hateful, and ends up being a different and better person than the upbringing would incline one to think.

Abusive Parents are commonplace in fairy tales and Classical Mythology which makes this trope Older Than Feudalism. Note that The Brothers Grimm, when they collected European fairy tales, were uncomfortable with the idea of Abusive Parents and so frequently changed the Abusive Parents in the traditional stories into abusive step parents.

Sometimes, a parent will go as far as to kill the child in question, in which case this is Offing the Offspring. In other cases, the parent's abuse occasionally drives the offspring to kill them, usually becoming a Self-Made Orphan in the process.

Do bear in mind, though, that while some acts are obviously abusive, not everyone agrees on the line between actual abuse and merely heavy-handed parenting (or even normal parenting). Some include spanking as abuse; others think it's appropriate given certain guidelines. Some believe it's okay to make a kid go without a meal (they won't starve that easily); others disagree. Making a kid miss a friend's birthday sleepover—is that emotional abuse? Raising a kid without exposure to TV? Telling your daughter she's getting fat? A little friendly name-calling? There's a line here somewhere, but not everyone agrees on where it is.

If a parent has just dumped the child, for whatever reason, that's Parental Abandonment; if they just aren't paying much attention, that's Parental Neglect. Contrast Mama Bear or Papa Wolf (where others abuse the children and the parents abuse the abusers). Also Contrast Good Parents. Abusive Precursors can be considered this on a metaphorical level. See Hilariously Abusive Childhood for when this is cranked up to absurd levels and played for laughs. See Evil Matriarch and Archnemesis Dad for characters who will take this trope Up to Eleven.

Unfortunately, Abusive Parents are often Truth in Television. It is horrible that children suffer cruelties at the hands of those who are supposed to be the most loving and trustworthy figures in their lives. And the damage can take years to undo, even with competent assistance (if it can be undone at all - often, the emotional scars will stay forever). If you are concerned this may describe you or someone you love, please take it very seriously. See this help guide for some Real Life information and organizations to contact. Also, Chiworld has an international list of hotlines and websites you can contact if you need to discuss abuse or other issues in your life.

You Are Not Alone.

No real life examples, please; All The Tropes is not a form of therapy.

Examples of Abusive Parents are listed on these subpages:

Retrieved from "https://allthetropes.org/w/index.php?title=Abusive_Parents&oldid=1711345"
Categories:
Cookies help us deliver our services. By using our services, you agree to our use of cookies.