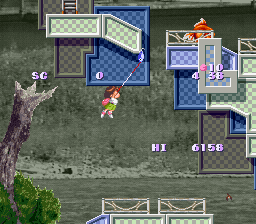 This is just how it begins...

Released in 1994 for Super Famicom, Umihara Kawase features the eponymous girl and her fish hook trying to reach doors in increasingly difficult fields while avoiding fish walking around. Yes, fish walking around. It can be beaten in less than ten minutes, but there's dozens of different ways to reach the ending credits, and impossible to see all of the fields in one playthrough. Plus, some doors take a lot of knowledge about the game physics to reach.

A sequel Umihara Kawase Shun (Shun meaning something being in season) was released for PlayStation three years later. It had fields that required even more intricate tricks with the hook, a shorter and springier line and... commercials. Yes, there were actually commercials inbetween some fields, from a company producing fishing supplies. In 2000, Umihara Kawase Shun Second Edition was released. It contained five new fields and some bugfixes, but most importantly, it replaced the commercials with artwork of Umihara.

Following that, the series stayed quiet for eight years, until Umihara Kawase Portable, a port of Shun, was released for the PSP in 2008. While at first welcomed, upon release it was found a huge disappointment due being riddled with bugs, and due to a change in physics but the fields staying the same some doors were rendered impossible to reach. This had to do with the port being developed by a different studio altogether, and was so bad that a boycott was called.

Fans did not have to be without their portable fix, however: in 2009, Umihara Kawase Shun Second Edition Kanzenban (kanzenban meaning "complete version") was released for the Nintendo DS. Not only was it a far better port, it also included the original game and had some extra fields. This port was overseen by the original programmer of the game, and the original artist contributed with new artwork. It has been recieved with great praise.

There is also a manga, but it does not seem to have very much to do with the game.

Tropes used in Umihara Kawase include:
Retrieved from "https://allthetropes.org/w/index.php?title=Umihara_Kawase&oldid=1688317"
Categories: