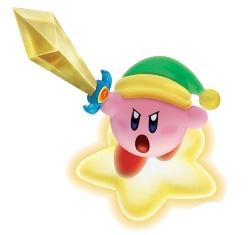 "I know they look cute, especially when they're these little kittens, but I'll tell you what, these are tough hunters."

—Thane Maynard of the Cincinnati Zoo, on sand cats.

A catch-all term for characters who, while being absolutely adorable, are also extremely Badass.

A significant overlap with Cute Bruiser and Little Miss Badass can occur. What distinguishes the Badass Adorable from their peers is the adorability. Particular emphasis is placed on their inherent vulnerability (emotional or otherwise), which is at odds with the abilities they can access.

Underneath the irrepressibly cheerful demeanor, behind the innocent wide-eyed gaze, lies an astonishing capacity for kicking your ass, leveling a city, or why not, leveling an entire country. Perhaps you've threatened their loved ones. Perhaps you've offended their inviolate sense of justice. Maybe you took the last piece of cake. No matter what shape the grievance against you takes, expect to be subsequently welcomed into a whole new realm of hurt.

Their destructiveness is directly proportional to their cuteness. Thus, Beware the Nice Ones. The Woobie, Destroyer of Worlds emerges as a result of the Badass Adorable being pushed beyond their limits.

Compare and Contrast with Crouching Moron, Hidden Badass, who may not even be cognizant of their own badassery. Could be The Ditz, or just the Series Mascot, but equally likely to be a Bunny Ears Lawyer. In some cases they are also a Mama Bear and Papa Wolf, though the latter is rare. See also Tyke Bomb, for when the Badass Adorable is reared for the sole purpose of serving as living weaponry. A Badass little critter can also be a Killer Rabbit. There is also a subtype which could be called "Badass Adorkable", where the character in question has Nerd/Geek/Dork characteristics as well (such characters are often male, but Willow from Buffy the Vampire Slayer would also definitely qualify). A particularly idealistic or heroic Badass Adorkable may be a Dork Knight.

Itself can be considered a Sub-Trope of Moe.

Examples of Badass Adorable include:

Tim: That rabbit's got a vicious streak a mile wide! He's a killer!
Robin: What's he do, nibble your bum?

Cameron: (lifting a young boy off of the ground) If you call your mother, the man will use her to get to you. He will kill her, then he will kill you.
Sarah: (sternly) Cameron.
Cameron: ...Would you like a bedtime story?

Ollie Reeder: "When I met you this morning I thought you were the nice Scot"
Jamie: "SHUT IT, LOVE ACTUALLY! WANT ME TO HOLEPUNCH YOUR FACE!!?"

Leela: If you want to be treated like a fellow crew member, fine, but no more purse rides, and no more dressing you up in your cute little sailor suit.
Nibbler: I keep telling you, that's my real naval uniform.

Nibbler: (Sighs) My best friend died in that uniform.

Mitch: Okay, okay, I surrender! You can stop behaving in a way counter-intuitive to how you superficially appear!

Sonia: (smiles sweetly) What? I don't like the dark!

Garth: Did you ever find Bugs Bunny attractive when he put on a dress and played girl bunny?
Wayne: No.
[cracks up laughing]
Wayne: No!
Garth: Neither did I. I was just asking.