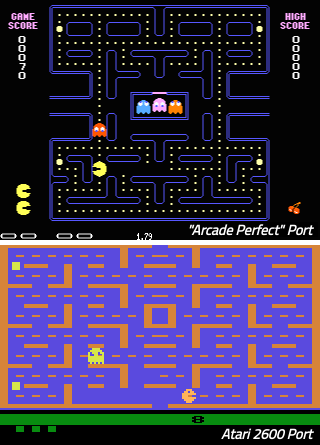 Porting a program to another system is seldom an easy task. If you had the good fortune to be able to consistently use cross-platform libraries while writing the original program, you might be able to get away without having to do any code rewriting. Otherwise, you're looking at significant rewrites ahead. Multi Platform development can help avoid this, but if the developers are rushed, the version for system with which they're least-familiar will likely suffer.

To qualify the program as a Porting Disaster one or more of the following major points has to be present.

Keep in mind that many of the so-called "ports" are, strictly speaking, not true ports but are more properly classified as "conversions" or "adaptations". Such "ports" were commonplace during the late 70s to the early 2000s due in no small part to drastic differences between consoles from different manufacturers (with some exceptions such as the Colecovision and SG-1000 being essentially identical to each other; while most systems do share the same main CPU, they very greatly in terms of graphics and sound generation). You'd often hear many a YouTuber conflate the word "port" for a mechanically-unrelated version of an existing game on a different platform, like in the case of one channel describing a Game Boy Color adaptation of a Mortal Kombat game as a "port" of the arcade original, despite sharing next to no code or assets with its arcade sibling. For a game to qualify as a port or conversion in a strict sense, it has to share assets with the original game if the game's code was rewritten for the target platform, albeit adapted or edited to account for any limitations, c.f. Doom for the Super Nintendo which used a wholly different engine but with assets taken from the original incarnation.

See also Polished Port, where a game is greatly improved during the development of a ported version.

Examples of Porting Disaster include:

Please only add examples of games that contain game breaking bugs or are broken to the point of unplayability, not minor glitches or annoyances.

Retrieved from "https://allthetropes.org/w/index.php?title=Porting_Disaster&oldid=1936693"
Categories:
Cookies help us deliver our services. By using our services, you agree to our use of cookies.