Everything About Fiction You Never Wanted to Know.
(Redirected from Useful Notes/Germany)
Jump to navigation Jump to search 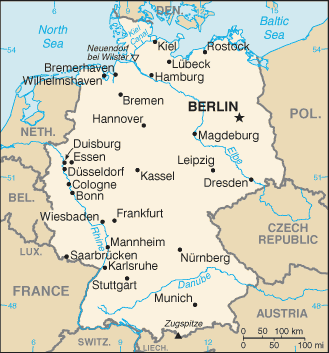 Germany (or Deutschland) is a federal republic in central Europe with a complicated and troubled history. Modern-day Germany is a major economic power and a member of the EU, G8 and the NATO after it had spent the Cold War divided into two countries--East Germany and West Germany.

A Short History of Germany

The Germanic tribes were already known to the Romans, and despite a series of bloody wars were never all incorporated into the empire. After the fall of Rome, they expanded into what are today France (also giving it its name), Italy and Eastern Europe, laying the foundation for the historical borders of the Holy Roman Empire.

Under the Frankish and Carolingian Empires, the German(ic) tribes were united, but that didn't last and the various German nations spent the next millennium broken up into hundreds of kingdoms, duchies, margraviates, bishoprics, merchant republics and others. The smaller ones were usually to some extent dominated by their bigger neighbors, such as Austria, Bavaria or Brandenburg (and latter Prussia), although the filthy rich city states that were a member of the Hansa could practically buy and sell fate. This splintering and constant infighting prevented the development of a national mentality of one German nation until much later, and regionalism prevails until today.

With the Reformation came the slow development of a standard German Language, which would ultimately foster a spirit of common German-ness, but first led to horrific religious bloodshed and was another nail in the coffin of the Holy Roman Empire (which became mostly an additional title for the Habsburg monarchs—although technically the Holy Roman Empire was elected among the princes of Germany, it was held by someone from the house of Habsburg from 1415 until 1806 with only a short break from 1742-1745). The reformation itself, incidentally, went only half-way. Today, about half the Germans are Protestants and half are Catholic. Rome and the Papacy still look at anything the German Catholicscook up with a lot of skepticism—after all, those same Catholics also cooked up the Reformation.

And then came Napoleon Bonaparte. He steamrolled most of Europe, defeated the traditional monarchies and basically forced the dissolution of the Holy Roman Empire. Thanks to his influence, the borders were radically restructured and of hundreds of states, only around forty were left.

After Napoleon's defeat, Prussia emerged as the dominant power in what was then considered German lands. For a while, Prussia and Austria struggled for dominance. Supporters of either side were known as Little Germans and Big Germans respectively. In the end, the Little Germans won. The magnificent bastardry of Otto von Bismarck led to the foundation of the German Empire in 1871, which reflected the Kleindeutsche Lösung (solution of a small Germany)-- the unification of all German countries except Austria.

Then came the first European unpleasantness over a silly thing in the Balkans. Long story short, Germany lost and a republic was declared. Humiliated by the defeat and territorial losses and burdened by the reparations mandated by the Treaty of Versailles, the Weimar Republic was off to a bad start. It was plagued by political instability (in the 14 years of its existence, it had 14 chancellors) and economic troubles—all of which destroyed the credibility of the government. This and a number of other factors contributed to the rise of Adolf Hitler and the subsequent second European unpleasantness.

After Germany lost that war (which is nowadays treated as a liberation in the German public), it was occupied by the four Allies. The nascent Cold War led to the establishment of two Germanies—the FRG and the GDR.[1] Over the next few years, both Germanies were rebuilt. Although the Wirtschaftswunder is associated with the West, the GDR didn't do too bad for Commie Land, either.

The Berlin Wall fell in 1989 in what constituted a Crowning Moment of Heartwarming for most Germans, and the two countries were reunified one year later. However, the subsequent economic troubles (especially in the former East), which have lasted until today, contribute to the continued existence of a mental divide between East and West.

For a more detailed look, see also the appropriate links below in the History section.

Retrieved from "https://allthetropes.org/w/index.php?title=Germany&oldid=1516491"
Categories:
Cookies help us deliver our services. By using our services, you agree to our use of cookies.