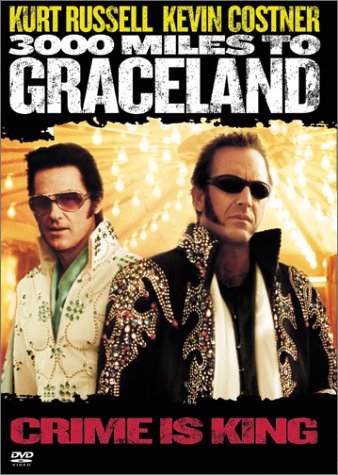 3000 Miles to Graceland is a 2001 action film directed by Demian Lichtenstein, and starring Kurt Russell, Kevin Costner and Courteney Cox.

Michael Zane (Russell) and four other criminals; Thomas J. Murphy (Costner), Hanson (Christian Slater), Gus (David Arquette), and Franklin (Bokeem Woodbine); execute a heist in which they steal $3.2 million from the Riviera Casino in Las Vegas by dressing up as Elvis impersonators whilst the casino hosts International Elvis Week, thereby making it difficult to identify them since hundreds of people in the building would be dressed in the same manner. The heist is successful, but when Franklin is killed, a dispute occurs over how his share should be divided among the survivors. It isn't long before it's just Michael and Murphy; with the latter pursuing the former across the United States as he flees both with the money and with a woman named Cybil Waingrow (Cox), with whom he has fallen in love, and her son Jesse.

The film clearly attempts to emulate the style of Quentin Tarantino. Whether it succeeds in this regard or not is up to you, though the general critical consensus, if the film's rating of 13% on Rotten Tomatoes is anything to go by, is that it does not.

Prior to the film's opening, Warner Bros. released a series of animated prequels voiced by stars Costner, Slater, Long and Woodbine. The Road to Graceland prequels marked the first time a major film's cast members contributed their talents to the creation of original Internet content for a film website.

Tropes used in 3000 Miles to Graceland include:

Federal Marshal Quigley: "Either quit smoking or get a new lighter."