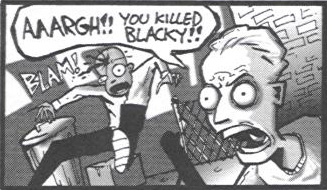 Pretty self-explanatory trope: in a film which involves a lot of character deaths, it seems like the black actor will inevitably be the first to go.

In the past this perception was because there were few black leads in big-budget films outside of those that focused specifically on race or used it to make a point. Historical moviemakers were generally writing to white audiences, so it was natural (at least in their opinion) for whites to get more screen time. And if the writers throw in a Token Minority to give the cast more believable racial balance, who do you think is going to die first, them or the folks who have a bigger role in the script?

A notable subversion of this trope came from the 1971 film Sweet Sweetback's Baadasssss Song. Nowadays the film is known more for popularizing Blaxploitation films, but most of those films were popular with audiences at the time for ignoring this trope altogether. As more black people with money to spend went to theaters, more and more prominent black characters and more big-name black actors emerged - none of which were likely to get killed off quietly. Studios had also finally accepted that white audiences are not generally as racist as was once assumed, and do not need to have a white protagonist. In other words, if you're gonna go after the black man nowadays, you might want to check the credits to see who's playing him. If it's no one you've actually heard of, they're probably fair game. Tony Todd? Go for it. Samuel L. Jackson? You can take your chances. Rosario Dawson? Yeah, good luck on that. Denzel Washington? Bad idea. Morgan Freeman? You should give up. Will Smith? Run away and hide.

As black actors became more common in significant roles, this trope found new ways to stay relevant. Films would take a Scary Black Man, turn him into The Big Guy, and kill him off to show how strong their monster is. In horror films, the afflicted main character might have a sassy Black Best Friend that gets killed off to show that this is no laughing matter. 80s horror shows were good at this, and film makers had growing backlash against all the exploitation films.

Compare Bury Your Gays as well as Red Shirt.

No real life examples, please; Real Life is not a movie, and does not conform to movie tropes.

Retrieved from "https://allthetropes.org/w/index.php?title=Black_Dude_Dies_First&oldid=1948488"
Categories:
Cookies help us deliver our services. By using our services, you agree to our use of cookies.