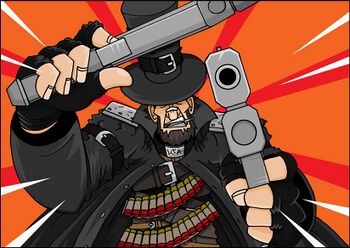 As far back as the westerns of the '50s, The Gunslinger has often strapped on two pistols. Double-fisted firing of handguns just plain looks cool. Especially when the shooter nails two different targets with one noisy, confusing volley. Slow-mo leaping and dodging with Bullet Time effects not required, but helpful. If the weapons of choice are fully automatic machine pistols, like Ingram SMGs or Micro-Uzis, bonus points.

This trope is a standard feature of The Western. Usually the two-gun fighter is just that much better than his opponents, that he can draw two guns in the time it takes them to draw one. In The Old West and The Cavalier Years, carrying two pistols was a practical result of long reload times on muzzle-loaders (although they were never used for suppressive fire like in the trope) as well as percussion revolvers and Single Action Revolvers that were loaded one cartridge at a time. As a matter of fact, real people in these times often wore entire bandoleers of a couple dozen Throw-Away Guns strapped to their body. After break action revolvers and speed-loaders came around, one gun could do all the work.

In police oriented shows, procedurals and action shows alike, this trope is largely a villain trait. The two-gun fighter is usually a destructive psycho with no regard for collateral damage, particularly Two Uzi Guy. Police characters generally use a proper technique, and fire one handgun with both hands. Also, accuracy of any kind is rather hard to achieve with two guns, and most times, you'll be lucky if you hit anything you're aiming for at all.

In Anime, as in much of Asian action cinema, especially Heroic Bloodshed movies, this trope is one of the primary elements of the art of Gun Fu, and the two-gun fighter in these media is often very skilled, able to pick off multiple targets with pinpoint accuracy and able to use his guns as melee weapons as well as other crazy things one would not normally be able to do with a gun. Sometimes the character has two special guns, with individual names and special properties, hearkening back to the samurai stories about named swords with special enchantments.

There are several ways to use Guns Akimbo:

God help you if you need to reload, but the wide availability of Bottomless Magazines and the habit of a lot of two-gun fighters to throw away their guns when they run out of bullets usually means it's not a problem. They may also go for an Unorthodox Reload, if they want to show off.

The logical conclusion is to make the wielder Multi-Armed and Dangerous.

Examples of Guns Akimbo include:

...so he is probably firing alternately from both pistols, shifting his attention between the two.

By the way, the word "akimbo" does NOT actually refer to Dual-Wielding guns. It means standing with your hands on your hips and elbows pointed outward. You can no more have anything but your arms akimbo than you can flip the bird with your ear.

Retrieved from "https://allthetropes.org/w/index.php?title=Guns_Akimbo&oldid=1893973"
Categories:
Cookies help us deliver our services. By using our services, you agree to our use of cookies.