A Nightmare on Elm Street/Nightmare Fuel

Everything About Fiction You Never Wanted to Know.
< A Nightmare on Elm Street
Jump to navigation Jump to search 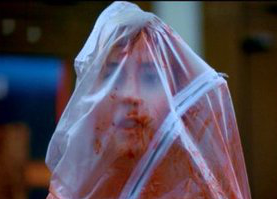 "When I looked down there was a man very much like Freddy walking along the sidewalk. He must have sensed that someone was looking at him and stopped and looked right into my face. He scared the living daylights out of me, so I jumped back into the shadows. I waited and waited to hear him walk away. Finally I thought he must have gone, so I stepped back to the window. The guy was not only still looking at me but he thrust his head forward as if to say, 'Yes, I'm still looking at you.' The man walked towards the apartment building's entrance. I ran through the apartment to our front door as he was walking into our building on the lower floor. I heard him starting up the stairs. My brother, who is ten years older than me, got a baseball bat and went out to the corridor but he was gone."

Back to A Nightmare on Elm Street