Everything About Fiction You Never Wanted to Know.
(Redirected from A Tuna Christmas)
Jump to navigation Jump to search 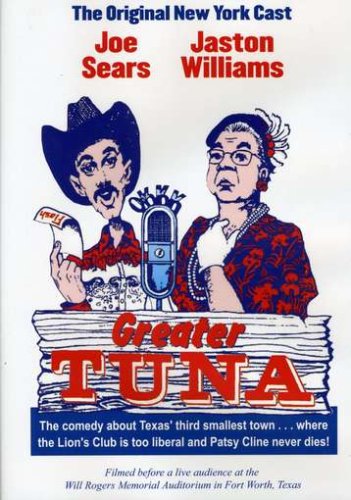 Greater Tuna is the first play in a series of four starring Jaston Williams and Joe Sears, who between them play at least twenty-four different characters.

Greater Tuna shows us what goes on in the day-to-day life of the many characters, but focuses the most on the chaotic family of one Bertha Bumiller. Other recurring characters of note include Vera Carp, leader of the Smut-Snatchers of the New Order, Petey Fisk of the Greater Tuna Humane Society, Arles Struvie and Thurston Wheelis of Radio Station OKKK, and Didi Snavely of Didi's Used Weapons.