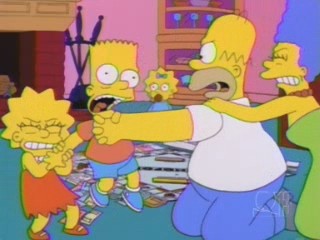 The entire premise for many Dom Coms is that the lead characters are a family of maladjusted people who generally don't get along. Usually they consist of a Jaded Washout and/or Bumbling Dad father, a mother who is either a paragon of common sense and efficiency or a repulsive harridan (or both, a la Roseanne), and two-three kids who are unhappy, dislike each other, and resent at least one of their parents. Also, the father and his mother-in-law tend to hate each other. The family is generally fairly poor, although not always - Arrested Development is about a large, rich dysfunctional family.

Don't get them wrong, though; for all the family arguments, the typical dysfunctional family never engages in actual abusive behavior - any that did would immediately lose all audience sympathy. Furthermore, when the family is facing a major problem from outside, they will generally pull together to face it. Dysfunctional Families may not get along, but they rarely actually loathe each other, and often receive Aw, Look -- They Really Do Love Each Other moments.

In American comedies this was originally a subversion of the Leave It to Beaver/The Brady Bunch almost-too-good-to-believe family, but eventually ballooned into a genre of its own. The Dysfunctional Family has been a British comedy staple since the 1950s.

Contrast with Quirky Household, where the people are merely weird, but generally happy—indeed, more happy than more conventional households.

Examples of Dysfunctional Family include:

Retrieved from "https://allthetropes.org/w/index.php?title=Dysfunctional_Family&oldid=1886664"
Categories:
Cookies help us deliver our services. By using our services, you agree to our use of cookies.