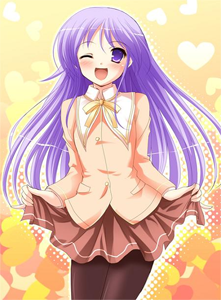 This is Jun Watarase. And yes, he is a guy.

Crossdressing characters who are presented in a positive (or at least neutral) way. Frequently presented as Attractive Bent Gender (or at least not unattractive), relatively "normal" people as opposed to perverts or sexual deviants.

Some permutations of the trope are more or less unique to Japanese works. The Japanese Wholesome Crossdresser is usually well-groomed, compassionate, nice, and above all, so convincing that their "true" gender is only mentioned on occasion, as a reminder to newer members of the audience. There's a fair chance someone will get a crush on them, although this is usually resolved after The Reveal.

The opposite of Creepy Crossdresser. May overlap with Disguised in Drag or its Distaff Counterpart, Sweet Polly Oliver. (If the character wears crossdressing disguises more often than seems strictly necessary, this trope may apply.) Wholesome Crossdressers tend to enjoy dressing, even if only reluctantly, secretly, or subconsciously.

Generally does not overlap with Drag Queens (which are more about "performance" and theatricality) or Transgender (usually a much deeper and more complicated condition), though there are exceptions.

Examples of Wholesome Crossdresser include:

Retrieved from "https://allthetropes.org/w/index.php?title=Wholesome_Crossdresser&oldid=1964707"
Categories:
Cookies help us deliver our services. By using our services, you agree to our use of cookies.