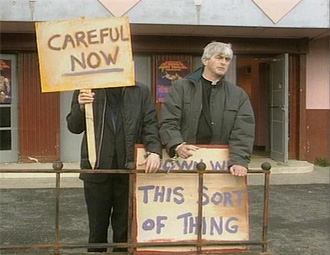 Down with this sort of thing!

People, stereotypically either conservative Holier Than Thou Bible thumpers or Political Correctness Gone Mad liberals, who believe that children—or people in general, but especially children—shouldn't be exposed to what they consider to be excessive violence, "perverted" minorities, sex, foul language, alleged support for the "patriarchy", any negative depiction of somebody in an ethnic minority, laziness, etc. The exact mix of what they object to varies from group to group.

The term "Moral Guardians" specifically describes people who take this attitude beyond the pale as zealous, absolute purveyors of the moral code, and the arbiters of what is best for everyone. Usually, they are self-appointed, and in the case of groups, some have been known to claim vastly larger memberships than they actually have.

They frequently complain to the nearest Media Watchdog, often using astroturfing to lend illusory weight to their complaints.

The Culture Police are sometimes Moral Guardians taken to a satiric and/or frightening extreme. The Bluenose Bowdlerizers are a form of Moral Guardians in our midst. Moral Guardians are often responsible for a work being Banned in China, or calling something a "Murder Simulator".

Examples of Moral Guardians include:

Retrieved from "https://allthetropes.org/w/index.php?title=Moral_Guardians&oldid=1967305"
Categories:
Cookies help us deliver our services. By using our services, you agree to our use of cookies.