Beware the Nice Ones 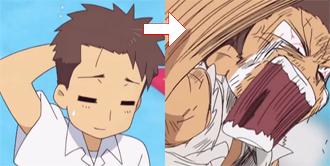 You made me climb Mt. Fuji for this, AND YOU SAY IT'S TOO WARM FOR YOU?!

Sometimes, trying to Break the Cutie can have consequences. Sometimes, the nicest person in the story gets pushed to the limit of what they can take. And the results? Are not pretty.

The sweeter, gentler, more polite, more peaceful, and overall nicer a character is, the worse it will be for whomever is in the vicinity when they're subjected to one too many rounds of Break the Cutie, or Dude, Where's My Respect?, a Rant-Inducing Slight, or hitting their Berserk Button or Rage Breaking Point. What was once a sweet and nice individual suddenly snaps and becomes something far worse than the Big Bad could have expected.

It's called Unstoppable Rage for a reason, you know.

Things get even worse if they're a Technical Pacifist, and worse still if they're an Actual Pacifist, since outright villains will only kill you. If a sweet, gentle soul snaps, all you can do is pray for a quick death.

This is also why pushing the Gentle Giant too far is generally a bad idea, and why Teaching Him Anger is a suicidal idea.

To an extent Truth in Television - deferring gratification with regards to expressing one's anger tends to lead to the end result being... less than pretty. Also, it's generally more frightening when a more mellow person starts acting up because it's so unexpected.

See also Good Is Not Soft, when a normally nice character realizes that nice will not get things done in a situation. They can coincide, if the realization and the outrage are triggered at the same time. The results are quite similar if they Madden Into Misanthropy, the difference being the new misanthrope isn't so much a violent dynamo as a care free Jerkass.

This is not to be confused with a character being a Bitch in Sheep's Clothing. While the latter trope's 'nice' image is usually just a facade for their genuinely callous personality, Beware the Nice Ones involves a genuinely nice character submitting to a rare act of malice. Repeated subjection of a nice character to this trope, though, may result in Flanderizing them to such a degree that it's impossible to tell the difference.

The polar opposite of Is This What Anger Feels Like?.

A This Means War declaration may be delivered as a result of it. For a common aftermath of this trope, see Cruel Mercy.

Examples of Beware the Nice Ones are listed on these subpages:

Retrieved from "https://allthetropes.org/w/index.php?title=Beware_the_Nice_Ones&oldid=1952942"
Categories:
Cookies help us deliver our services. By using our services, you agree to our use of cookies.