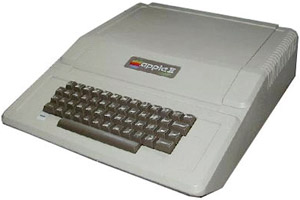 Introduced in 1977 the Apple II (offically spelled "Apple ][") was, to many kids in America in the 1980s and 1990s, their first introduction to a computer that could also play some decent games. At its premiere, the Apple II was a total shock to the industry. When most manufacturers were still selling single-board computers for developers, or big metal boxes that looked more appropriate in a server room than a family room, the II's stylish plastic case and integrated keyboard proved to be far more accessible to the normal user. Its clever integrated-motherboard design by Apple co-founder Steve Wozniak made it easy to connect to a common TV (important given that color monitors cost well over $500 in the mid-1970s and remained expensive well into the 1980s), as well as providing two color graphics modes when most computers could barely display monochrome text. It also shipped with a simple BASIC interpreter called "Integer BASIC", also written by Wozniak, as well as a few simple games on cassette tape.

Upgrades to the system added more memory, 80-column graphics and an expanded BASIC interpreter (written by Microsoft, of all companies) called "Applesoft BASIC". The biggest upgrade, however, came in 1978 with the introduction of the "Disk II" floppy drive system. Not only was it faster than most other floppy systems of the time, but yet another clever design made its controller more affordable by putting some of the more difficult functions in software, which also made it one of the biggest targets for Copy Protection. Around this time, business users were starting to take notice, and the first Killer App for a personal computer, the VisiCalc spreadsheet package, debuted in 1979.

The Apple II was so influential that when IBM decided to build its own PC in 1980, it borrowed many of the Apple II's design cues, including a built-in BASIC interpreter and many expansion slots. Apple's own attempt at building a "serious" computer, the Apple III, didn't fare so well; a rushed design and Steve Jobs' insistence that the machine not have a fan made it highly unreliable; it was also deliberately incompatible with a lot of Apple II software, especially games. Apple's response was to introduce a new member of the II series, the IIe, which simplified the motherboard design and added a new 16-color "double high res" mode to help compete with the brand-new (and much cheaper) Commodore 64.

The most advanced member of the II family was the 16-bit Apple IIgs, introduced in 1986 to much fanfare. It used the brand-new GTE 65C816 processor (the same one used in the SNES), and upgraded the line's graphics and sound substantially. While it wasn't as well accepted as the 8-bit models were among game developers, the IIgs was as much a fixture in many schools as the IIe before it, and in many ways outstripped the Macintosh of the day.

This proved to be its doom, though, as the Apple II only finally succumbed to old age when Apple discontinued the IIgs and IIe in 1993 — a run of 16 years. The reason for this was that with the advent of GS/OS, IIgs was favorably competing with low-end Macs (read: they shared up to 50% hardware and software), and Apple didn't want to undermine its flagship product line by selling two incompatible products that were essentially the same thing. A large enthusiast community still exists for the Apple II line, and real diehards are still making hardware and software for them.

Retrieved from "https://allthetropes.org/w/index.php?title=Apple_II&oldid=1779986"
Categories:
Cookies help us deliver our services. By using our services, you agree to our use of cookies.