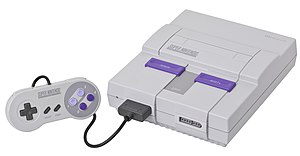 The NES had a long run, and was still quite popular years after it launched. Yet competition wouldn't stay away forever (and Nintendo's attempts at a monopoly in the United States had been legally struck down), and the Sega Genesis was catching up in the United States, while the TurboGrafx-16 was gaining ground in Japan.

The SNES was made to keep up, and so began one of the fiercest Console Wars in history. It was known as the Super Famicom in Japan (officially adopting the "Famicom" nickname of its predecessor, the Family Computer) while in South Korea, it's known as the Super Comboy (슈퍼 컴보이) and it was distributed by Hynix. While the SNES was very much a success (eventually beating out the rival Genesis in market share), Nintendo would still make some mistakes behind the scenes. Nintendo originally had a deal to make a CD add-on for the SNES, and signed with Sony for the latter to make the device. But the contract for the sound chip Sony made included a clause where Sony would receive all software royalties. The President of Nintendo, Hiroshi Yamauchi, decided to drop the contract and sign with Philips midway through development (and behind Sony's back), which turned the relationship into a rocky one. Eventually Nintendo, Sony and Philips consolidated forces to work on the CD add on, until Sony decided to go it alone, using the already-constructed hardware to launch their own console, the PlayStation.

One add-on for the system, did get made: The Super Game Boy, a cartridge attachment that allowed the system to play Game Boy games, and even add color to them.

Also notable for having very different casings on both the console and the games between the American and European versions. The picture shows the American version, with the harder edges, while the European edition was more rounded.

Retrieved from "https://allthetropes.org/w/index.php?title=Super_Nintendo_Entertainment_System&oldid=1928910"
Categories:
Cookies help us deliver our services. By using our services, you agree to our use of cookies.