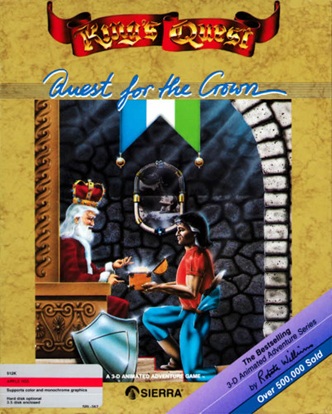 King's Quest: Quest for the Crown (originally simply King's Quest) is the first game in the long-running King's Quest series. It was released in 1984 and had a huge impact on the world of gaming: It was the first animated computer game (the earliest ones simply had static images), it cemented Sierra as the premier maker of Adventure Games in the '80s, and it helped popularize the adventure game genre and many of the tropes associated with it (for better or for worse).

The plot is simple. You are Graham, a knight in the realm of Daventry. Your king has tasked you with finding Daventry's three lost treasures: A magic shield that protects the kingdom from war; a magic mirror that can see the future; and a magic treasure chest that magically replenishes itself. To find these treasures, Graham must explore the kingdom and solve puzzles. Oh, and avoid random deaths, that's important too.

The game is best known for its Fantasy Kitchen Sink setting, limited graphics and interface (blocky 8-bit characters and Text Parser), often exasperating puzzles, random deaths and Unwinnable situations (though the fan remake has a "no unwinnable situations" mode). It has been remade with better graphics twice, once by Sierra itself, and once by fans.

Tropes used in King's Quest I include:
Retrieved from "https://allthetropes.org/w/index.php?title=King%27s_Quest_I&oldid=1744852"
Categories: