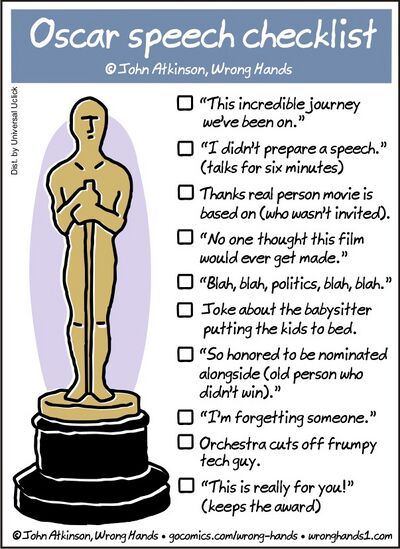 Have an acceptance speech Cliché Storm.

Multi-hour annual program, typically broadcast early in the year, dedicated to showcasing an organization (usually involved in the media in some way) by handing out little statuettes to a small number of its members. The presentation of the awards themselves is interleaved with Filler and musical numbers.

At their best, awards shows can be bright, entertaining television celebrating the best and brightest of a particular field of endeavor. Even then, though, such programs are often slow and ponderous, with only the host's jokes and the various musical numbers to liven things up between the inevitable Award Snub and the N variations of the same basic "thank you" speech every recipient gives.

And, no matter what the awards are for, the show's primary purpose is to advertise the organization that hands out the awards. Yes, these are highly-publicized infomercials.

Retrieved from "https://allthetropes.org/w/index.php?title=Award_Show&oldid=1878775"
Categories:
Cookies help us deliver our services. By using our services, you agree to our use of cookies.