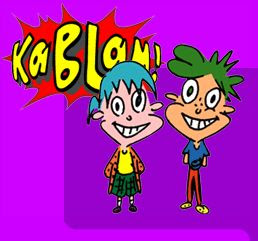 KaBlam! (Kablam! Theater in pre-production) was an animated anthology show designed to show off more animated shows, and the first spin-off of All That. Running only a half-hour, it crammed in four two-to-five minute programs per episode as well as various miscellaneous animated short series that would come and go. It spawned two spinoffs, Action League NOW (which was the centerpiece of KaBlam! throughout its run) and Angela Anaconda. It was masterminded by Will McRobb and Chris Viscardi, the creators of The Adventures of Pete and Pete (McRobb also wrote for Nick's original Doug and Ren and Stimpy), as well as Robert Mittenthal, who co-created Nickelodeon's incarnation of |Double Dare. It aired on Nickelodeon from 1996-2000, with many episodes left unaired. It's more less-remembered than any other Nicktoon save Oh Yeah Cartoons, but there's somewhat of a reason there.

It was hosted by Henry and June, who resided inside a comic book (which was more notable earlier on; season four toned down most of the comic book refrences except for "turning the page") in which they frequently broke the fourth wall, mocked tropes, and got into their own adventures.

Common shorts on the show included:

These appeared in almost every episode, with the exception of Life with Loopy which suffered frequent Schedule Slippage in season one, and Sniz and Fondue when their production company went under mid-season three.

Other recurring shorts were:

Despite the show's lack of commercial success (no VHS/DVD releases; all tie-in merchandise was released silently) and low ratings (though critics liked it), it has a strong cult following among fans of '90s Nickelodeon, and is fondly remembered for its clever comedy, likable and endearing characters, lots of crap snuck past the radar, and at least one freaky scene an episode.

The show was considered at one point for Teen Nick's The 90s Are All That block.

Note: Action League NOW and Angela Anaconda have their own pages. Any related tropes should be listed there.

Tropes used in KaBlam! include:

Retrieved from "https://allthetropes.org/w/index.php?title=KaBlam!&oldid=1845138"
Categories:
Cookies help us deliver our services. By using our services, you agree to our use of cookies.