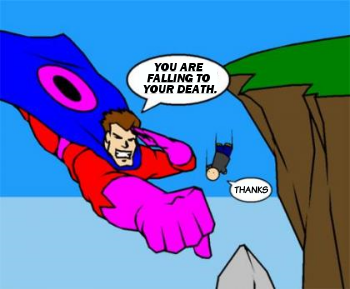 Above is a picture demonstrating the trope. You are currently reading a self-demonstrating caption for said picture. Both help you understand the trope.

He strives to be Mr. Exposition... But there's something wrong with his exposition. Most of the time, whatever he has to say should already be obvious—both to the viewers and to any other character with half a brain. After saying anything, another character might state "Gee, you think?" Or if someone's attempt at humor was disrupted, they might say Don't Explain the Joke.

In other words, Captain Obvious states the obvious. This means that his statements are self-evident.

In some cases, this is justified because Captain Obvious is also The Ditz, or so puzzled by something that he can't help but state, well, the obvious.

See also As You Know, Exactly What It Says on the Tin, Narrating the Obvious, Shaped Like Itself, Department of Redundancy Department and Captain Obvious Aesop. Not to be confused with Captain Oblivious. Sometimes, may be demoted to Commander Contrarian, a commander who disagrees. It Makes Sense in Context is what fans will say when other people bring it up. Slightly justified if everybody else is Captain Oblivious.

This trope sometimes overlaps with Mathematician's Answer, when Captain Obvious is stating the obvious to be a smartass or to avoid giving a more helpful answer to a question. It can also overlap with Non-Answer if the answer is self-evident and clearly not what the questioner wanted to know.

That was a description!

Being one is often the cause of this reaction: You Can Talk Obviously.

Examples: (The folders below contain examples of this trope.)

Comics (this folder is about Comics)

Fan Works (this folder is about Fan Works)

Film (this folder is about Films)

Literature (this folder is about Literature)

Music (this folder is about Music)

Newspaper Comics (This folder is about Newspaper Caricatures)

Radio (this folder is about Radio)

Theatre (this folder is about Theatre)

Web Comics (this folder is about Web Comics)

Other (this folder is about everything else)

Real Life (this folder is about Real Life)

There is one more example beyond this line.

This is the end of the article. There is nothing more for you to read on this page. Except for these links to similarly-themed pages. (We call them categories.) Oh, and by the way, you just read Captain Obvious trope! On All The Tropes! With your eyes! On a screen! (Probably!) Now you're really sick of the joke!