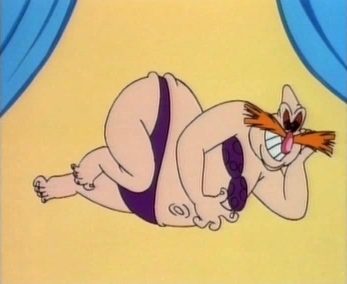 The evil twin of Fan Service from another dimension, possibly with a goatee (especially if female).

Fan Disservice looks like regular garden variety Fan Service, except that the creators intentionally use the circumstances around it to make the scene outright creepy or disgusting. Corpses in sexy poses, dialogue that adds Mood Dissonance, seeing someone naked who you really wouldn't want to see naked...there's a hundred and one ways that titillation can transform into horror. Just think of how many Slasher Movies have Fanservice Extras meet their demise by way of Death by Sex.

Note that it often seems that film schools grind this into their students, as far too many movies intercut sex scenes with scenes of violence or Squick, to truly rub in our faces the polarity of beauty and horror. Of course, the directors just want to be artists (that, or they're puritanical types who are obsessed with portraying sex in the most negative light possible). But sometimes it's implemented in a funny way, so the director can just mess with you.

Fan Disservice can still wind up being Fan Service, if you're into that sort of thing. Rule 36, people. Also, there are many examples linked elsewhere on the wiki which are listed as disservice solely because they involve naked men. Male nudity by itself is not Fan Disservice; there are demographics that male nudity tends to be Fan Service for. Some drag queens are often subject to this trope.

Sometimes, there's nothing objectively wrong with the body in question, but the context of the situation makes it unsexy. See Full-Frontal Assault.

This trope can often overlap with Naked People Are Funny -- as often as not, naked people are funny precisely because of Fan Disservice.

Oh, and people? This trope is for deliberate, intentionally unsexy things. Suffice to say that mileage will vary -it always does- but if you personally find any of these examples arousing, please save the Natter; let it just be your little secret, 'kay?

Examples of Fan Disservice are listed on these subpages:
Retrieved from "https://allthetropes.org/w/index.php?title=Fan_Disservice&oldid=1957460"
Categories:
Cookies help us deliver our services. By using our services, you agree to our use of cookies.