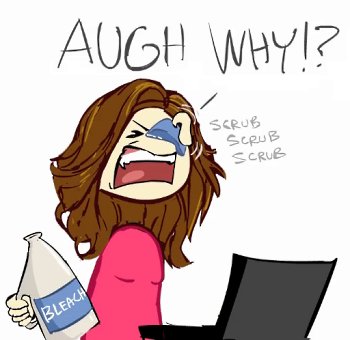 The poor dear. She was just doing perfectly innocent research on old Eroges.

A character has just witnessed something so icky, so unsettling, so horrific, that he must express his disapproval. This Is Wrong on So Many Levels that a simple "That's gross" won't suffice — only Brain Bleach can make things right.

The character informs the world that the continued knowledge of this subject is an unbearable affront to his sanity. He will not be at peace until he can remove his brain from his skull, scrub the offending mental image out with steel wool and mental floss, then disinfect the entire area with bleach (disinfecting his eyes or ears with fire is optional).

A Super-Trope to Screaming At Squick (a specific reaction to this).

Compare with Out, Damned Spot! (characters try to scrub away their guilt) and Kill It with Fire.

For those subjects that make you or the audience want to reach for the Brain Bleach, don't list them here. This is for in-universe reactions only.

Will probably be necessary after seeing No Yay, Glurge, a Gainax Ending, a Shock Site, Squick, and Fan Disservice (among many other things). Often the result of Schmuck Bait.

Examples of Brain Bleach are listed on these subpages:

Retrieved from "https://allthetropes.org/w/index.php?title=Brain_Bleach&oldid=1865101"
Categories:
Cookies help us deliver our services. By using our services, you agree to our use of cookies.