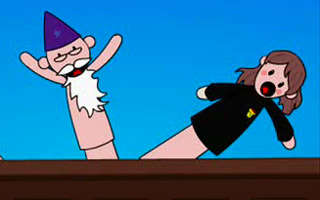 Boy, it's a good thing people know these are hand puppets, other wise this would be the pic for The Pornomancer

Nudity is one of the last great taboos, particularly in the United States. Whereas it's OK to show violence, blood, and to a certain extent "hate speech" on TV, a tiny bit of nudity will cause an outright scandal. Just ask Janet Jackson and her "nip slip", which got more attention then the show she was putting on at the time, despite its sexually suggestive content that some say bordered on sexual assault by her co-star.

So while nudity itself is right out, the insinuation of nudity, as well as the reaction to it, is just titillating enough to make it onto the air, especially on comedies.

Naked people are funny, after all, especially paired with a prudish costar to react to them, or in a situation where they're not expected or wanted.

A character who ends up naked in a place they don't expect may need to use Hand or Object Underwear or a Scenery Censor to hide - from the camera, that is - after losing their Modesty Towel (and they will lose their Modesty Towel). Almost always they'll end up being seen by another character, meanwhile, the audience will have to make do with, at best, a Toplessness From the Back shot.

The Invisible Main Character probably can't wear clothes, if only because the insinuation that he or she is running around naked makes it funnier - plus, when the character does inevitably materialize, it'll invariably be in front of as many people as possible. (Fridge Logic: How come no mad inventor has ever been able to come up with a formula to make clothing invisible?(even more Fridge Logic: because that would defeat the point of clothing))

It's tempting to suppose that nudity is funny precisely because it's so unusual in the "civilized" world, and weird things are naturally funny. However, this logic goes out the window when you learn that nudity has been a prominent ingredient in humor for at least 3,000 years. Even the ancient Egyptians found naked people funny, and they weren't themselves shy about baring their arms or legs, or even their chests. So maybe the humor lies primarily with boobs and penises, which have been shameful to expose since Neolithic times.

Special mention goes to nudism. Nudism is a philosophy that basically boils down to "There's nothing wrong with being naked in certain situations, including some group situations". The Theme Park Version of this is "Hey, look, naked people," and is a great way to throw some Fan Service into your show. Nudists tend to be shoehorned into a few specific roles, depending on their role in the plot:

For specific examples of Nudity as humor, see:

Examples of Naked People Are Funny include:

Retrieved from "https://allthetropes.org/w/index.php?title=Naked_People_Are_Funny&oldid=1826042"
Categories:
Cookies help us deliver our services. By using our services, you agree to our use of cookies.