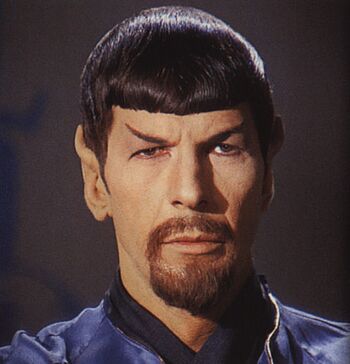 Boldly Evilly going where no razor has gone before.

A man with a beard is a man to be feared.

What is it about bad guys and facial hair? For some reason, we often take being clean-shaven as an indicator of being strait-laced and, under more traditional morality, a good person, pure of spirit. In older, simpler days, a traditional hero would not even have five o'clock shadow, even if he's been on the run and well away from his shaving mirror for a week.

Conversely, a man with facial hair is less pure, at the very least a Darker and Edgier Anti-Hero—more often, he's an outright villain, and his chin is deliberately contrasted with the depilated chin of the hero.

Note that this generally applies to small, well-groomed beards, especially goatees. Having a huge bushy beard turns one into a Nature Hero, sailor, grizzled old prospector or Boisterous Bruiser. Except, of course, for the beards recommended by certain religions that are in the public focus at the moment.

The characters who sport a Beard of Evil are usually either the Big Bad or a second-in-command. This may play into the fact that in both western and eastern culture, goatees are traditionally worn by members of the aristocracy, and Aristocrats Are Evil.

The Beard of Evil has a long history of being associated most closely with the Evil Twin or Evil Counterpart, and you probably already know why. It also scores extra evil points if combined with a shaven head. (Anybody with a bald head and a beard is pretty much guaranteed to be a card-carrying villain unless they are black or East Asian. Blame Alex Raymond and Anton LaVey.)

Satan is also frequently depicted with a goatee (which probably came from depictions of Goethe's Mephistopheles as a 16th-century gallant).

A subset of Good Hair, Evil Hair. Not to be confused with Growing the Beard or the Badass Mustache. No real reason why a beard can't be evil and Badass Beard.

Examples of Beard of Evil include:

Other than that, there are actually very few major Bond villains with a beard, only henchmen.

Retrieved from "https://allthetropes.org/w/index.php?title=Beard_of_Evil&oldid=1953527"
Categories:
Cookies help us deliver our services. By using our services, you agree to our use of cookies.