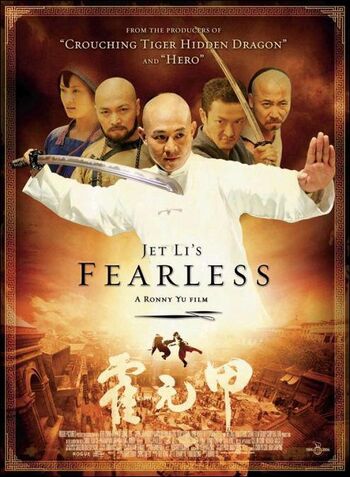 Fearless (original title: 霍元甲) is a movie starring Jet Li, directed by Ronny Yu and released in 2006. It is a fictionalized biopic of famous martial arts master Huo Yuanjia (1868-1910).

Huo was the son of a wushu professor in Tianjin, but because of his poor health, he wasn't allowed to study martial arts himself. However, after seeing his father lose a fight against a dishonorable adversary, he decides to become a master in his own right in order to redeem the family name.

As years go by, Huo's fame rises, but so does his vanity. One day, he confronts Qin, the master of a rival school and, in the heat of combat, deals him a deadly blow. The latter's followers retaliate by killing Huo's mother and daughter. Stricken with grief, he wanders the countryside in a state of shock, and is taken in by a kindly old woman and her blind granddaughter.

Sharing their life and that of the simple country folk in their village, he nurses himself back to psychological health. In 1907, a more mature and humble man, he returns to Tianjin, and is appalled by the decay of Chinese society and the arrogance of foreigners. He restores his fame by winning a fight against an American wrestler, and with the financial backing of an old friend founds the Jingwu Association, a martial arts school in Shanghai.

The foreign-controlled Shanghai Chamber of Commerce challenges him to a fight in which he will have to defeat four national champions in a row. He easily defeats the three Western ones, and only the Japanese one turns out to almost be a match for his martial prowess. However, the Japanese diplomat who had co-organized the event poisons Huo's tea, and although the Japanese fighter gracefully admits defeat, Huo collapses and dies moments later.

Tropes used in Fearless (film) include:
Retrieved from "https://allthetropes.org/w/index.php?title=Fearless_(film)&oldid=1648722"
Categories: