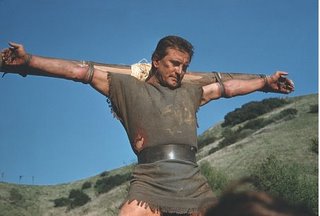 Hang in there, buddy.

This can be a whole stock plot.

A villain, often an Evil Overlord with 0% Approval Rating, harms the hero or their people who are not nearly as high ranking and powerful. Despite being hopelessly outmatched, the brave hero strikes back and wins some battles through cleverness, willpower and sheer charisma.

Ultimately though, our hero gets the worst of it in a very nasty way and finally bites the dust, Defiant to the End, with fighting spirit and charisma intact, if nothing else. The hero will show this through shouting or growling a lofty Facing the Bullets One-Liner or by dying calmly and full of dignity. In fact, the moment itself can be a Crowning Moment of Awesome in the hands of the right sort of hero.

A cynical viewer may wonder why the hero dying a miserable death after losing everything they ever had would encourage anyone to get on this villain's bad side, but the oppressed masses are animated by the notion that no matter how intimidating the opponent is, it's still possible to resist. These rebels sometimes lose too, which makes them all Doomed Moral Victors. Either that or a lot of people just liked this person, and now they're really pissed.

Not to mention that the hero will be reunited with their loved ones in the afterlife (provided the setting has one, of course,) while the villain (especially in the case of immortality) will never see them again.

This is heavily reliant on, as J. R. R. Tolkien called it, the "Theory of Courage," the idea present in older iterations of Norse Mythology that despite the foreknowledge or likelihood of failure, one must press on to do the moral thing for no better reason than the fact that you should.

A non-violent Doomed Moral Victor is someone who does Turn the Other Cheek and gets killed for it.

See Tragic Hero for a failing hero whose fate is their own fault. Contrast Tragic Dream. See also As Long as There Is One Man, My Death Is Just the Beginning, Evil Cannot Comprehend Good, Last Stand.

Examples of Doomed Moral Victor include:

Retrieved from "https://allthetropes.org/w/index.php?title=Doomed_Moral_Victor&oldid=1682077"
Categories:
Cookies help us deliver our services. By using our services, you agree to our use of cookies.