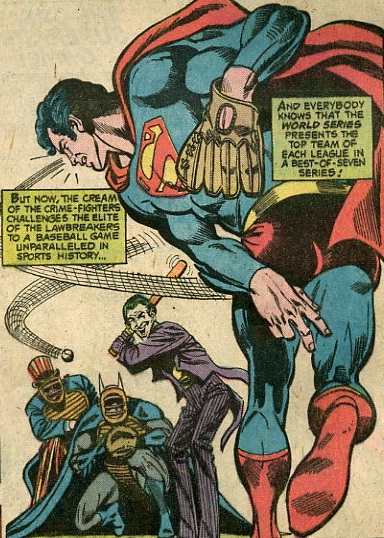 Could you really expect The Joker to, well, play by the rules in this game?

"For me, the interesting relationship is the one between Mario and Bowser; I mean on some days they fight to the death in fiery climactic showdowns, while on other days they go go-karting together, play tennis, even team up in some of the RPGs. Sure, he kidnaps the Princess a whole bunch, but no-one seems to begrudge him for that anymore; it's just what he does. It's like begrudging a dog for licking its own balls."

*Gasp!* The hero and his arch rival are staring each other down! This is it! We're getting the Ultimate Showdown of Ultimate Destiny... wait, why are they sitting down and playing a game of checkers?

Not all heroes and villains are actively out for each others' blood, some heroes are reasonable and tolerant, and a few baddies can feign civility. On more extreme ends, enemies who are opposites (ideologically or otherwise) can engage in a peaceful activity to have a bout of diplomacy. But just like a Sympathetic POV can show even the antagonists have a good side, likewise Friendly Enemies can sit down and have a nice chat every so often. In the end, they're not there to engage in fisticuffs, though they may engage in a bout or two of social combat. Rather, they're there just to meet as friendly rivals and maybe, just maybe, win the other person over to their point of view.

Essentially, the heroes join the Villains Out Shopping. Occasionally, it will be a dinner date, and it can happen frequently when the hero is Living with the Villain, especially if they are Punch Clock Hero and Villain. If the bout is meant to emphasize their mutual intelligence, they'll probably play chess.

Now, this all sounds very nice and cheerful, right? Maybe people don't have to hate each other, even if they're opposed? However, this can take an entirely different feel if the villain is a Karma Houdini who has committed horrible crimes and is getting special consideration because he and the Hero share history.

This trope commonly comes up when the cast involves itself as a Universal Adaptor Cast, where they might be bitter enemies in one canon but are neutral or even friendly in another.

The title is a reference to a Ben "Yahtzee" Croshaw review showcasing how Mario and Bowser of Super Mario Bros. are apparently on pretty genial terms, even though Bowser keeps kidnapping the princess. "It's practically expected".

Compare Dating Catwoman. Contrast Did Mom Just Have Tea with Cthulhu?. If the enemies happen to be deities as well, it's God Karting with Beelzebub. If, rather than Go Karting With Bowser, you're instead playing Energy Ball Pong with Ganondorf, that's Tennis Boss.

Examples of Go-Karting with Bowser include:

Mario: Well, you know what dey say, keep you friends-a close, and you enemies-a closer. But dey also say, if you enemy is a gigantic spiky creature, who breathes-a da fire, keep him-a super-duper close!

Elan: I know that sometimes, the hero has to play baccarat with the enemy, even though logically it would make more sense for them to just be trying to kill each other.
What I don't know is how to play baccarat.

The Joker: Call me insane but I consider us friends
I've brought the DVD so we can watch it again!

Megabyte: I've always wanted to do that.

Jesse Owens: Hitler didn't snub me — it was our president who snubbed me.