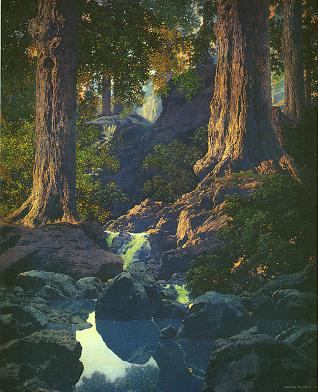 Often paired with Adventure Towns in anime, this area consists of the entire relatively pristine wilderness outside of The City. Urban sprawl is not much of an issue, especially if you just start building your cities up (or underground). An hour's drive from your house can take you to a place that's virtually a national park. Cue the stirring overworld music!

It's a hiker's dream. This might be a result of historically good city planning, although a story taking place After the End might imply a disaster hit the place and it's just regrowing after the humans vacated.

If humans do live there, but it is still idyllic, it is Arcadia—which, indeed, often lies by the Ghibli Hills.

Of course, despite its soothing grass, great blue skies and small animals, Ghibli Hills is still a lawless wilderness, crawling with wandering monsters, highwaymen and wild magic. Hence, it is subject to what is known as Ayn Rand's Revenge. See also The Lost Woods. Though it may also serve as the Good landscape, in contrast with the Evil Is Deathly Cold Shadowland, Grim Up North.

In most anime, especially with ones trying to deliver a message, this speaks to the nostalgia of many older directors for the traditional Japanese countryside that largely no longer exists because of urbanization. One historical western equivalent is Merry England for historical settings. Other times the pristineness is explained by alternate history, particularly the avoidance of major conflict or wars which lets people concentrate on improving themselves.

Named for the lush, friendly settings of Studio Ghibli films. Which largely stems from the fact that Mitaka and Musashino, Tokyo's affluent residential suburbs where the studio itself is headquartered,[1] generally have exactly that kind of scenery.

The polar opposite would be Mordor or Polluted Wasteland... or perhaps City Planet.

Examples of Ghibli Hills are listed on these subpages:

Retrieved from "https://allthetropes.org/w/index.php?title=Ghibli_Hills&oldid=1966045"
Categories:
Cookies help us deliver our services. By using our services, you agree to our use of cookies.