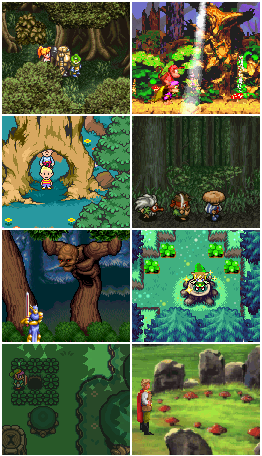 The Lost Woods are no ordinary forest. They are a vast old-growth forest where the trees reach into the heavens. Their canopies cover the sky, leaving only shafts of sunlight steaming between the branches. Even the normally tiny mushrooms are huge and imposing. (Whatever size they are, it's probably not a good idea to eat them. Probably.) Nature has run wild, and man is not welcome here. If you are forced to enter, it's best to lower your axe or else risk the attention of the Ents.

Besides your usual forest creatures, all manner of strange things lurk in the shadows. In any setting, it may be home to a Tree-Top Town. In ye olden days, the Lost Woods were home to The Fair Folk, the Big Badass Wolf, Plant Person and the occasional tree out to kill you. In the modern day, it's home to the axe-wielding Serial Killer, and campers- particularly those of the teenage variety- had better stay out of them. In The Future, it's home to cloaked snipers who want to make a hunt out of you. And Ewoks.

Okay, the Lost Woods may not always be dangerous, but they're shadowy and creepy and only a Crazy Survivalist (or Nature Hero / Jungle Princess) would actually try to live in this place. Thus, they serve as a closer-to-home (for Europeans and North Americans, at least) version of the Jungle. (When very dangerous, may edge into Garden of Evil.)

Frequently goes hand in hand with The Maze.

May be a Shadowland for even Arcadia, but even more likely for a brilliant and happy city.

As a setting for Video Game stages, The Lost Woods are a cousin to the Green Hill Zone, and frequently occupy the second level—apparently operating by the logic that a forest is a little more dangerous than Ghibli Hills but not by a whole lot, and that plains and forest aren't too different considering that both are defined by the type of vegetation they have. Unless the stage is placed much later, then things will usually be a lot more difficult. They may or may not be haunted (later stages often are), but either way, expect everything to try to kill you.

Frequently a Genius Loci, but it's not required. For a slightly more realistic setting, see Wild Wilderness. Compare The Hedge of Thorns.

Named for the infamous Recurring Location in the Zelda games.

Examples of The Lost Woods include:

Retrieved from "https://allthetropes.org/w/index.php?title=The_Lost_Woods&oldid=1877430"
Categories:
Cookies help us deliver our services. By using our services, you agree to our use of cookies.